In 1920, the then King of England sought to intervene during the fatal hunger strike by Cork-born Lord Mayor of Cork, Terence MacSwiney. On this occasion, however, far from the usual “Off with his head!” when confronted by a rebellious subject in Ireland, the King was trying to save MacSwiney’s life. And why did “His Highness” bother to intervene?

Veteran republican Gerry O’Hare has just read ‘The Hunger Strike That Rocked an Empire’ by Dave Hannigan, published by The O’Brien Press. Here is his review. 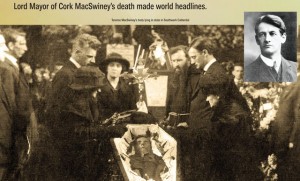 The little-known royal intervention, mentioned above, is just one of many in a new book on MacSwiney written by journalist Dave Hannigan. MacSwiney lay dying in Brixton jail – but the British cabinet, led by Lloyd George, refused the King’s intervention. They claimed that if they conceded to MacSwiney’s demands, every prisoner would embark on similar tactics. There were several prisoners already on hunger strike in Cork jail to support MacSwiney.

Using newly-released archive material, including Anne MacSwiney’s eye-witness diaries, the author chronicles each day of MacSwiney’s sacrifice, telling of its impact on the highest echelons of British power and of its enduring legacy. Many books have been written about MacSwiney’s life and his role in Irish politics. It’s fair to say it has all been pretty well documented.  But this book emphasizes the role of his formidable sister, Annie.

It was she who took an early lead part in campaigning to save his life. She visited her brother every day of his ordeal. The family totally relied on her. She, for example, routinely dealt with the press. Her daily press conferences, and reports of her interventions to save her brother’s life, spread around the world like wildfire as nation after nation rallied to MacSwiney’s cause.

It was to Annie that MacSwiney entrusted his final wish: that he wanted to be remembered as a soldier. He asked her to write down precisely what he was saying, right down to the time and date. He then asked her to read it back to him to ensure it would be proof that he was a soldier, dying for the ideal of a Republic.

The painful agony of his hunger strike is detailed by the author and is a tribute to Annie and Marie, MacSwiney’s wife. While Marie’s plight became increasingly desperate, and Annie’s battle continued in the full gaze of the world’s media, another battle was taking place behind the scenes.

The dramatis personae in that competition were a harassed King George V and the entire British cabinet. The King was still reeling from criticisms that he had not lifted a finger to save his cousin, and the entire Romanov family, before they were executed by the Bolsheviks. He felt, within himself, that he should offer MacSwiney clemency.

Amongst those who battled against him were Lloyd George, AJ Balfour and, surprise, surprise, Winston Churchill.

heir argument was a simple one.  Release MacSwiney and the Irish police and British Army would revolt. Not for the first or the last time the gun was inserted into Irish politics …

The cabinet’s point of view was a commanding argument and convinced even the King. Eventually, as for the Romanovs, he did nothing.

Earlier, in a telegram sent to the British Home Office, he told of the pressure mounting on him to offer clemency:

“I am receiving appeals from many quarters, including the Editor of the Manchester Guardian, to exercise my prerogative,” he wrote. “The government knows my views, and while knowing the difficulty of their position, I still advocate clemency”.

The reply from Edward Short was also short and to the point:

“Mr. Secretary Short regrets that the decision must stand.  Irish Sec inform that release of Lord Mayor would have disastrous results and probably lead to mutiny of both police and military in Ireland”.

Despite even more urgent appeals from the King, the British cabinet prevailed.

We learn from Hannigan’s book, however, that although this avenue failed to save MacSwiney, there was international support from all over the world. The author has worked hard to bring these details to light in a well-written book. I recommend it as it gives a real insight into the British way of treating those who go on hunger strike in Ireland.