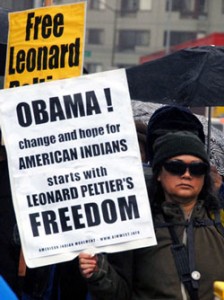 February 4th has been named as International Day of Solidarity with Leonard Peltier. In Ireland there will be a protest outside the US Embassy at Ballsbridge in Dublin at 2pm next Saturday. The guest speaker will be Native American activist Jean Ann Day. There will also be fundraising events held in Dublin, Derry and Belfast. The Derry event will be held in the Gweedore Bar on Thursday 9th February. The Belfast event will be held on Friday 17th February in the Rock Bar on the Falls Road (9pm-midnight) and tickets cost £5.

Leonard Peltier is a Native American serving his thirty-sixth year in prison. The events that led to arrest and the falsification of evidence used to convict him have long been highlighted by award-winning films like Michael Apted’s ‘Incident at Oglala’ and best-selling books such as Peter Matthiessen’s ‘In the Spirit of Crazy Horse’.

Leonard was wrongfully accused in 1975 in connection with the fatal shooting of two FBI agents. Government documents show that without any evidence at all the FBI decided from the beginning of its investigation to ‘’lock Peltier into the case’. U.S. prosecutors knowingly presented false statements to a Canadian court to extradite Leonard to the U.S.

The statements were signed by a woman who was forced by FBI agents to say she was an eyewitness. The government has long since admitted that the woman was not present during the shootings.

Meanwhile, in a separate trial in Cedar Rapids, Iowa, Leonard’s co-defendants were acquitted by reason of self defense. Had Leonard been tried with his co-defendants he also would have been acquitted. Unhappy with the outcome of the Cedar Rapids trial, prosecutors set the stage for Leonard’s conviction. His trial was moved to an area known for its anti-Indian sentiment—Fargo, North Dakota. The trial judge had a reputation for ruling against Indians, and a juror is known to have made racist comments during Leonard’s trial. FBI documents prove that the U.S. government went so far as to manufacture the so-called murder weapon, the most critical evidence in the prosecution’s case. A ballistics test proved, however, that the gun and shell casings entered into evidence didn’t match. The FBI hid this fact from the jury.

Leonard was convicted and sentenced to two consecutive life terms. According to court records, the United States Attorney who prosecuted the case has twice admitted that no one even knows who fired the fatal shots.

Leonard Peltier is sixty-seven years old and in poor health. An accomplished author and artist, he is renowned for his humanitarian achievements. In 2009, Leonard was nominated for the Nobel Peace Prize for the sixth consecutive year.

Although the courts have acknowledged evidence of government misconduct – including forcing witnesses to lie and hiding ballistics evidence reflecting his innocence – Leonard has been denied a new trial on a legal technicality.

Nelson Mandela, Desmond Tutu, fifty-five members of Congress and others – including a judge who sat as a member of the court in two of Leonard’s appeals – have all called for his immediate release.

The Courts may not be able to act but Barack Obama, as President, can.

Please join with us to free an innocent man. On February 4, 2012, tell Obama to grant clemency to Leonard Peltier.

Leonard is an example of how a person can be imprisoned but not broken. His struggle is compared to Nelson Mandela’s and his message is also one of hope. His prison writings are full of love and belief that his people are stronger than the miserable conditions they experience on the reservation or the poverty many of them find in cities.

Despite his ailing health and diminishing eyesight, Leonard is still an inspirational leader to Native Americans generally and his own Lakota people particularly.

February 4th is a Worldwide Day of Solidarity for Leonard Peltier. Please link your name to others calling for an immediate pardon for Leonard so he can live out his days peacefully with his people.

Jean Ann Day, of the Ho-Chunk Nation, moved to Oglala in 1975 to support and protect the traditional people who had requested help from the American Indian Movement. She witnessed the shoot-out aftermath on Pine Ridge, and survived the reign of terror. She is a National spokesperson for the Leonard Peltier Defense Committee.