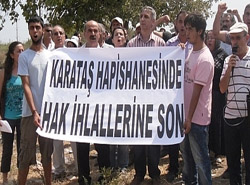 Hundreds of Kurdish prisoners are on hunger strike in Turkish jails, some for over 55 days. Observers believe that political prisoners will begin dying within a week. Denis O’Hearn, author of the best-selling book about Bobby Sands, ‘Nothing But An Unfinished Song’, has written a feature for ‘Bianet’, Turkey’s leading left media outlet.

Here are more details on the condition of the prisoners and their demands:

The Peace and Democracy Party’s (BDP) Mersin Deputy Ertuğrul Kürkçü drew attention to the insanitary conditions and prisoners’ lack of access to clean water at the Karataş Women’s Closed Prison in the southern province of Adana where inmates joined in a country-wide hunger strike across Turkey’s jails over a month ago.

The hunger strikes began in protest of the continued isolation of Abdullah Öcalan, the jailed leader of the Kurdistan Workers’ Party (PKK,) and the obstacles that lie before the use of the Kurdish language in Turkey.

“[Authorities] have moved the women on hunger strike at the Karataş prison to a separate ward. The strikers are not receiving visits. They have not been placed under any isolation in this region’s prisons, as far as we have heard. They have someone keeping them company,” Deputy Kürkçü said.

20 inmates are currently on hunger strike at the Adana Kürkçüler Prison, while five more inmates have also joined them at the Karataş Women’s Closed Prison, Kürkçü explained.

Seven minors currently under arrest at the Mersin E-Type Prison have also gone on a hunger strike, he added.

All the strikers at the Kürkçüler Prison are convicts, and half of them have been on hunger strike since Oct. 5, while the rest joined them on Oct. 15, he said.

“The health condition of the prisoners who started the strike on Oct. 5 has begun to deteriorate. No one has yet been taken to hospital,” Kürkçü said, though he also explained that the inmates at both the Karataş and the Kürkçü prisons had access to medical professionals.

“There was already a grave problem of sanitation at the Karataş Prison. They have no running water. Firefighters bring water to the prison, but this is no drinking water. The prison guards also said they did not drink off from this water. Prisoners who do not have enough money to buy drinking water use this water instead,” he said.

The prison is at double its maximum capacity, while there is also a significant problem of rats and insects, Kürkçü added.

The issue could potentially lead to more fateful consequences, and the government should not test the prisoners’ determination, he said, adding that the deadlock could result in the loss of some lives.

“[People] should strive for a solution regarding these [prisoners] who have rightful demands and whose lives are in peril, rather than talking about why or how the strike began,” Kürkçü said.

Meanwhile, lawyer Cemil Özen highlighted the prisoners’ deteriorating health condition, especially at the Diyarbakır D and E-Type prisons where inmates have been on hunger strikes since Sept. 12.

Journalist Tayyip Temel can only speak for a few minutes, while he has become overly sensitive to noise and is experiencing difficulties in walking, reading and speech, he said, adding that the prison administration had also turned down a request to acquire a vitamin complex.

Prison officials refused to comment to bianet on the issue and said they were not authorized to speak on or provide information about the hunger strikes.

Temel has also shed excessive amounts of weight and is having difficulty even when he is only drinking water, lawyer Özen said, adding that the hunger strikers were going through some medical checks nonetheless.

Other inmates who began the hunger strike on Sept. 12 and Mazlum Tekdağ, who had penned a letter to the BDP’s co-chair Gültan Kışanak, are also in a similar condition as Temel, he noted. 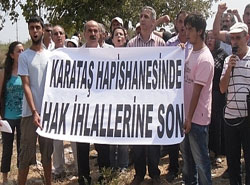