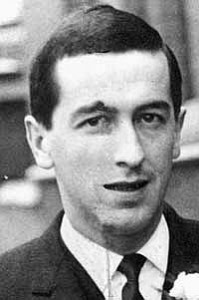 Today, February 12th, is the thirty-third anniversary of the death on hunger strike of Frank Stagg from County Mayo. He died in Wakefield Prison, blind, weighing four stones after sixty-two days on hunger strike, his wife and mother at his bedside.

Born in the village of Hollymount, County Mayo, in 1941, Stagg was the seventh child of a family of thirteen. He attended Newbrooke Primary school and later went on to attend the Christian Brothers Secondary School in Ballinrobe. People in his native village remembered him as being a ‘nice lad from a nice family’, others recalled his prowess at Gaelic football and handball. On leaving school he worked with his uncle as a gamekeeper before immigrating to England.

In England, Frank was employed as a bus conductor and later qualified as a bus driver. In 1970 he married Bridie Armstrong from Carnicon, County Mayo. He joined Sinn Fein in Luton in 1972 and shortly afterwards joined the IRA. Frank remained in touch with home and spent his annual holidays in Hollymount up to the year of his arrest and imprisonment in 1973. In the words of his mother, “he never forgot he was Irish”.

Stagg was arrested in Coventry in April 1973 and was convicted in November of conspiring to commit arson, for which he received a ten-year sentence. At his trial the following October with six others, including Rev. Patrick Fell, he was described as commanding officer of the Coventry IRA unit.

There was little or no evidence to connect him with the charge. He was convicted under the notorious British Conspiracy Laws, brought in during the latter half of the 19th century to imprison Irish political activists without a fair trial.

Frank Stagg began his sentence in Albany Prison on the Isle of Wight. Insisting that he be treated as a political prisoner he refused to do any prison work, which resulted in him spending most of his time in solitary confinement. In March 1974, while in Parkhurst Prison, he and Michael Gaughan joined the hunger strike begun by the Price sisters, Hugh Feeney and Gerry Kelly demanding repatriation to Ireland. All suffered the horrific ordeal of forced feeding.

Stagg continued for 70 days. Following the death of Michael Gaughan as a result of force feeding the remaining hunger strikers ended their fast after assurances from the prison authorities that they would be transferred to a prison in Ireland.

Frank’s prison life was one of broken promises and torture. Promises that his demands would be met. He had three simple demands: [i] a guarantee that he would not be returned to solitary confinement; [ii] the right to educational facilities and not to do prison work; [iii] the setting of a ‘reasonable’ date for a transfer to an Irish prison.

The authorities, however, pursued a policy of giving in to prisoners’ demands when they were on hunger strike only to renege on their promises once the prisoner came off protest. Frustrated by such vindictive tactics and determined to secure his demands or die, Frank Stagg and several other prisoners embarked at the end of 1975 on another hunger strike, Stagg’s fourth in two years.

In early February 1976, as Stagg and another comrade entered their eight and seventh weeks, respectively, on hunger strike, Stagg, recognising the intransigence of the British Home Office and the hopelessness of his own status, persuaded his comrade to end his fast, for the sake of his wife and children.

One week later, the inevitable happened. Frank Stagg died after fasting for 62 days. In his final message to his comrades in the Republican Movement he wrote: “We are the risen people, this time we must not be driven into the gutter. Even if this should mean dying for justice. The fight must go on. I want my memorial to be peace with justice.”

In order that he be afforded a republican funeral, Stagg stated in his will that his body should be entrusted to Derek Highstead, then Sinn Féin organiser in England. The Wakefield coroner complied with his request.

Meanwhile, the Fine Gael/Labour coalition government tried to cajole, intimidate, and bribe members of the Stagg family to collaborate in a week of desecration. Having failed, the institutions and servants of the state were used to hijack the body and orchestrate a parody of a funeral of honour. As Frank Stagg’s body was being flown home, and as the aeroplane was approaching Dublin airport, the government ordered Aer Lingus to fly on to Shannon where the Special Branch seized the coffin. Fine Gael Taoiseach Liam Cosgrave chose to defy in the most callous and insulting manner imaginable the deathbed wishes of a hero and to use the Special Branch to bury him.

The state’s hijacking of Frank Stagg’s body was vile enough and virtually a carbon copy of the Crown’s treatment of Tomás Mac Suibhne’s remains in 1920, but not even the Crown dared to defy Irish traditions and interfered no more once the diverted coffin reached Cork. It was a shaming and shameful affair.

On Saturday, 21st February, Requiem Mass, boycotted by almost all his relatives, was held. He body was taken to Ballina where it was brought by Special Branch men to a grave some 70 yards from the Republican Plot in Leigue Cemetery, where he had asked to be buried. In order to prevent any re-interment by republicans, the Special Branch afterwards poured six feet of concrete on top of the coffin.

The following day, republicans held their own ceremonies at the Republican Plot, despite a mass presence of Gardaí. A volley of shots was fired by IRA Volunteers to salute their fallen comrade. In his oration Joe Cahill made a promise to Frank Stagg. He said: “I pledge that we will assemble here again in the near future when we have taken your body from where it lies. Let there be no mistake about it, we will take it, Frank, and we will leave it resting side by side with your great comrade, Michael Gaughan.”

For six months the Gardaí were stationed in the cemetery watching the grave but eventually they gave up and left. And when they did, the IRA, on 5th November 1977, disinterred Frank Stagg’s remains and reburied them with Michael Gaughan, thus carrying out his last request. 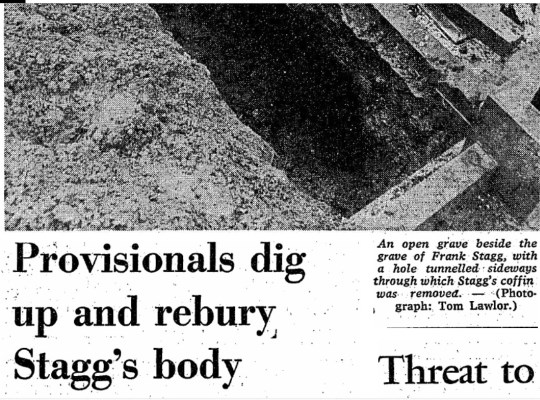