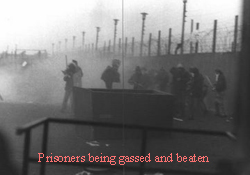 Ceartais is a lobby group of former Long Kesh Prisoners and their families who are campaigning to reveal the truth behind the exposure of Long Kesh prisoners to CR gas used by the British army on October 15th, 1974, during the disturbances and burning down of the prison camp by inmates. Currently the organisation has almost finalised compiling the list of those held captive during the CR attack. Over Easter Ceartais will be lobbying republicans during Easter Commemorations for support.

Ceartas (the Irish name for Justice) is the brainchild of former Long Kesh POW Jim McCann who for years has campaigned to get to the truth behind the British Army attack on prisoners during the burning of Long Kesh in October 1974. Along with Charlie Mawhinney, Joe Doherty and Mairtín Óg Meehan, McCann aims to “lift the curtain of secrecy that the British Government has thrown over its use of chemical weapons against unsuspecting prisoners”. One of the motivating factors for the former prisoners is the high incidence of cancers among former POWs who were targeted in the gas attacks.

McCann explains: “In 1974, republican POWs were being constantly harassed by the prison authorities so in October we took action.” This action saw hundreds of POWs burning the Long Kesh Cages and taking over the camp. In response, the British Army was deployed and, in the course of two days of fighting, hundreds of prisoners were seriously wounded when British soldiers fired rubber bullets at point-blank range and beat them with batons. However, it was the use of gas what campaigners believe was the highly toxic CR gas that has caused more concern in the long term. As the fighting between the British Army and the POWs intensified, the prisoners were driven into the playing fields at the centre of the camp. Once there, helicopters flew overhead and dropped clusters of gas. The operation to use CR gas was authorised under guidelines codenamed Snowdrop.

British Government documents obtained by Ceartas quote an AW Stephens, Head of the British Ministry of Defence’s DS 10, describing Snowdrop as “the contingency plan developed to deal with hi-jacking and other serious armed terrorist incidents” with members of the SAS – transported in helicopters – trained to carry out the operation.

Many of those gassed, who had suffered the effects of CS gas during rioting on the streets of the Six Counties, described completely different sensations when engulfed by the Long Kesh gas. “We were left completely incapacitated,” says McCann. “I remember having this sensation that I was drowning.”

According to McCann, “approximately 12 per cent to 15 per cent of the prisoners affected in the camp at that time have since contracted various forms of cancer, including leukemia and other lung diseases.”

Ceartas maintains that there is further evidence of a cover up in relation to the use of CR gas. In the days and weeks after the fighting was quelled, prisoners had their blood tested with samples being taken by British Ministry of Defence (MoD) technicians without explaining why they were doing these tests. “My medical records for 1974 have mysteriously gone missing,” says Jim McCann. “Through my solicitor I have been able to get my medical records for the whole time I was in prison except for the year 1974. Nor has anyone admitted to taking blood samples from the prisoners”.

CR gas was developed as a riot control weapon through the late 1950s and into the early 1960s by the British Government. When it tried to market this gas to the United States military it was refused on the grounds that “not enough was known about its carcinogenic and mutanogenic effects”.

In other developments, in response to a parliamentary question from Labour Party MP Ken Livingstone, then Armed Forces Minister John Spellar, also of the Labour Party, admitted that “some 200 hand-held spray devices containing CR were held at HM Maze [Long Kesh] at that time”. ‘The Guardian’ newspaper reported in March 1974 that “the chemical has already been issued to Long Kesh military guards and will be used in the event of serious rioting”. And writing in The Observer in 2005, journalists Craig Morrison and Martin Bright disclosed: “The British Government had secretly authorised the use of a chemical riot control agent to be used in prisons at the height of the Northern Ireland Troubles.”

Jim McCann explains: “We want the floodgates to open as we slowly attempt to put the jigsaw together piece by piece because we have been fobbed off and lied to for far too long.

“The curtain of secrecy in which the British Government is attempting to shroud the truth in is full of holes and although it is already too late for some of us we are refusing to let the injustices continue.”
[The above article was written by Peadar Whelan and printed in An Phoblacht on July 1, 2008]