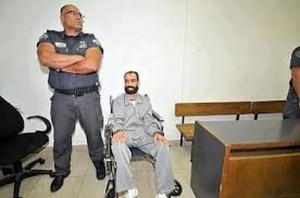 On 15th February Palestinians held non-violent protests outside various Israeli prisons demanding the release of Palestinian prisoners Samer Issawi, Ayman Sharawna and Yousef Abdel Rahman Eshteiwi who are all on hunger strike. Though released in a prisoner exchange deal in 2011, they were re-arrested under the notorious Article 186 of Military Order 1651 which requires them to serve the rest of their sentences. There is great concern for hunger striker Samer Issawi who is now close to death. The brave and determined protestors had to face tear gas and live rounds fired by the Israeli army. For more information see:

Below is a recent letter sent by Samer Issawi who has been on hunger strike 146 days.

Translated by Aziz Arafat
I feel a huge pain in muscles , the doctor said that my nerve network has clearly started to get damaged.
I am suffering from pain in stomach and constant pain in right kidney area and severe headache feels like a power outage hits my head. Heartburn urine and diarrhea , I have started drinking water since last Friday’s evening, now I take vitamins and medical solutions to keep my nerve network intact.
I am gradually losing my sense of sight, hair lose and my hands noticeably shiver , I suffer the same symptoms but this time severely.
In the hospital , at 1:00 pm , I asked them to bring me some water and sugar, however, they brought them at 9:00 pm. I pulled a cannula out of my hand ( should be inserted for no longer than 3 days, but I had to do it myself because they didn’t do it for me ).
There are two Russian doctors that treat me well , now, I am at a room that lacks central heating and warm water, the room’s door is glassed, they don’t hear me when I ask for help .
My greetings go to all the people who show solidarity with me , I assure that I’m still on my hunger strike regardless of what’s going on, my hunger strike will only end when I’m victorious .
I send my greetings to the people of Al Esawiah village for their support of my hunger strike, We’re fighting this battle defending the Palestinians’ dignity, defending the Gazans who were martyred and injured and defending the 1.6 sufferers of Gaza who scarified a lot to accomplish the prisoners’ swap deal.
I derive my power and steadfastness from the people of Palestine , Jerusalem and Al Esawiah neighborhood who have been protesting for my hunger strike.
Once again I assure that I am still on hunger strike,and the lawyer (Shireen Issawi) is just the one who can tell about my exact situation or Mashaal , just don’t listen to any distorted stories about my hunger strike from any other sources.
I made my bequest to be prayed (Al-Janaza) over me in Al Aqsa Mosque , and to be buried nearby to my martyred brother Fadi Al Issawi in case I pass away.

My salutation goes to those who showed a firm stance with me, Arabs and foreigners, their solidarity represents the world’s free determination and a real democratic work contrary to the Israeli’s fake one.
We see countries pretend to be democratic while they are standing motionless in a crime being committed against prisoners and a just cause whose only demand is to free prisoners committed literally nothing. I was detained for no apparent reason, my fault is that I entered Jerusalem, Jerusalem is part of the West Bank !!
I pledge to go on in my hunger strike ’till a one end , either freedom or martyrdom.
We won’t give less than the leaders who sacrificed their lives to protect their nations. Leaders such as Omar Al Mokhtar as well as William Wallace who refused recognition and loyalty to the king, I won’t be less than those. 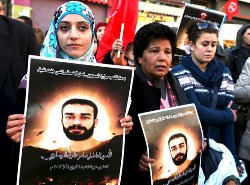