Jim Gibney, who proposed the idea of standing Bobby Sands in the Fermanagh and South Tyrone by-election, was at last Sunday’s hunger strike march in Fermanagh and in this feature he recalls the year of 1981: 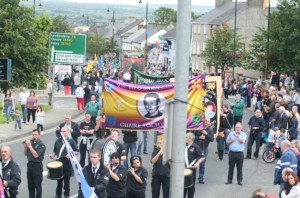 The car journey on Sunday to Derrylin to commemorate the 33rd anniversary of the 1981 hunger strike evoked strong memories of that momentous year. Back then I was constantly on the road from Belfast to Fermanagh and Tyrone on one errand or another related to the hunger strike.

Back then I relied on friends to drive me on my very busy schedule. On Sunday I drove myself to Derrylin.

On the way I recalled hearing the news on the radio of the sudden death of Frank Maguire MP for Fermanagh/South Tyrone and the idea striking me that we should stand Bobby Sands if a by-election were called. Later, I spoke to Gerry Adams about the idea and we, in turn, met Bernadette McAliskey to discuss it with her as her name was mooted as a possible candidate. Bernadette was on crutches and still recovering from an assassination attempt a few months earlier.

As I passed along the M1 motorway I glanced at the Long Kesh site. The internment cages have been demolished but the prison hospital where the lads died on hunger strike is preserved with a number of other prison buildings for future generations to visit and learn about life for the prisoners and the guards who lived there.

With other republicans I am a member of a group that helped to protect and preserve the prison buildings especially the prison hospital and I am very proud of that.

I was interned in Long Kesh as an 18-year-old and again spent four years there in the H-Blocks in the mid-1980s.

In 1981 I visited Bobby, Francis, Raymond and Tom in the prison hospital and Martin and Joe in the visiting area of the prison.

As I passed the road sign for Loughall I thought of the lads killed by the SAS there in 1987.

The sign for Dungannon brought me back to 1981 and the faces of Bernadette McAliskey and Francis Molloy came into my mind and the huge effort both put into Bobby’s election campaign. Their electoral knowledge was invaluable. The rest of us knew nothing about elections. I was 27 and had never voted.

In the back of a car on the way to a meeting in our Dungannon election office I recalled writing a draft of Bobby’s election manifesto for his approval and amendments with the message about electing him to save his life.

I recalled sitting in a car with Gerry Adams at a church car park close to the Dungannon electoral office with Bobby’s nomination papers, with hours to go, ready to pull his name from the election contest if Noel Maguire (Frank Maguire’s brother) did not withdraw his nomination. We couldn’t risk Bobby fighting an election unless he had a clear field.

As I drove towards the Ballygawley roundabout I recalled the hourly battle republicans had with the UDR on this stretch of main road to keep Bobby’s posters on the lampposts and telegraph poles.

There was a permanent team of republicans travelling that road putting up posters as quickly as the UDR took them down.

The road signs Augher, Clogher, Fivemiletown reminded me of the single-decker bus packed with canvassers from all over Ireland but especially West Belfast who, dressed in Bobby Sands T-shirts, knocked as many doors as they could in those villages.

The bus, its colour cerise pink, was dubbed the ‘Pink Panther’.

The sign for Maguiresbridge brought Owen Carron’s name to mind. Owen, who was Bobby’s election agent, was building a house in Maguiresbridge which had been destroyed by a loyalist bomb.

The sign for Enniskillen brought me to the Technical College where the announcement was made on Friday, 10th April, that Bobby had won the election and that guttural cheer from Danny Morrison welcoming it.

As I approached Lisnaskea more names came into my head. The Gleesons’, with whom Gerry Adams and I had called to see, to sound out their opinion about standing Bobby in the election. I looked up the main street and recalled Gerry and I going into Maguire’s pub to speak with Noel about him withdrawing his name from the electoral contest.

I was there on one other occasion meeting Frank Maguire, who was then MP, about the situation in the H-Blocks and Armagh Women’s prison.

As I got out of the car in Derrylin I saw a poster of Owen Carron on a lamppost. It was a replica of the one used when he stood in the by-election after Bobby’s death. He won the seat with an even bigger margin than Bobby had.

I met Lynn Boylan, Sinn Féin’s newly elected MEP with her partner Eoin Ó Broin and we chatted about the rise and rise of Sinn Féin in the south. We were joined by ‘Fawnsey’ from South Derry who had been on the blanket protest in the H-Blocks.

Pat Fahy, the campaigning solicitor from Omagh, also joined us and told the gathering the story of when he and I were canvassing for Bobby.

As I passed a pub at the end of the Derrylin Road I recalled a bitter cold winter’s night in 1978 when Fergus O’Hare and I met Owen, for the first time, to set up the Fermanagh Relatives Action Committee.

Along the road as I walked I was joined by Dessie McManus who I hadn’t spoken to in thirty years. I think he was 20 when we last met. He was Owen Carron’s driver. He has a great memory and we spoke non-stop of those frantic and tragic yet heroic days.

I stood in the field outside Derrrylin where the hunger strike rally took place beside Phil Flanagan. He wasn’t even born when Bobby and the others died.

He is one of Sinn Féin’s bright and young MLAs elected for Fermanagh. There were several bright and young republicans on the stage who spoke about 1981 including Michelle Gildernew who has held Bobby’s seat twice, taking it the first time in 2001 on the twentieth anniversary of the hunger strike.

The guest speaker last Sunday was Ireland’s Palestinian ambassador who spoke about the horror of the daily massacres of his people in Gaza by the Israelis.

He said that he and many others in Palestine, Lebanon and Syria first heard about the struggle in Ireland through the news coverage of the deaths of the hunger strikers.

His last words to the rally was that the Palestinian people despite the human carnage would never give in until they had their own homeland.