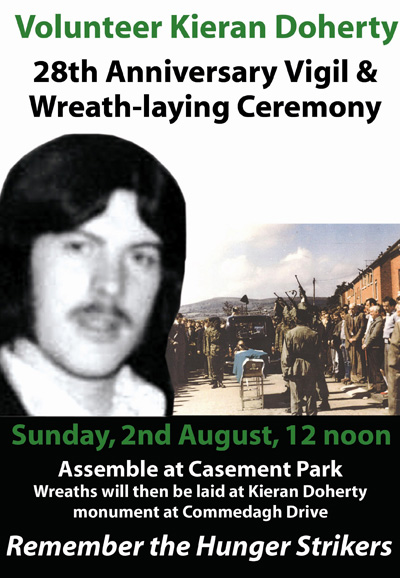 A vigil and wreath laying ceremony is to take place in West Belfast on Sunday, 2nd August, at 12 noon to mark the 28th anniversary of the death on hunger strike of Volunteer Kieran Doherty TD.

‘’Kieran Doherty’s involvement in the Republican movement began in 1971 when he joined the Fianna.

‘’He was interned by the British in Long Kesh from February 1973 to November 1975 and was among the last internees released.

‘’In August 1976 he was arrested again, charged with possession of firearms and explosives and remanded in Crumlin Road Jail.

‘’In January 1978, he was sentenced to 18 years and was brought to the H-Blocks where he joined his comrades on the blanket protest immediately.

‘’In June ‘81 he was elected by the Irish people as a TD for the constituency of Cavan/Monaghan, receiving 9,121 votes.

‘’He is remembered as a loving son and brother to his family, a valued and popular member of the Andersonstown community, a great friend and an exceptional comrade.

‘’His dedication and determination epitomise the spirit of freedom that lives on today in West Belfast and throughout Ireland.

‘’So, on Sunday, 2nd August, at 12 noon, we are gathering outside Casement Park where we will hold a vigil. We will then walk up Slemish Way to the Kieran Doherty monument at Commedagh Drive where a short wreath laying ceremony will take place.

‘’We would ask people to come along and remember Kieran and all the Hunger Strikers with pride.’’ 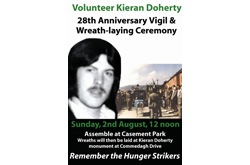