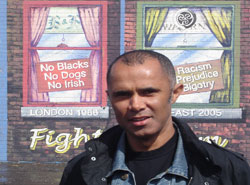 Tim Brannigan’s mother was from Belfast, his father from Ghana. Tim’s Irish republican activism led to his arrest and imprisonment in the H-Blocks of Long Kesh in the 1990s. Tim’s powerful memoir explores the meaning of identity and is a book which has garlanded praise across the full spectrum of the media. As part of Féile an Phobail’s Youth Fringe Festival Tim will be speaking on August 6th in St Mary’s University College, Belfast, about his experiences. Here, veteran republican Gerry O’Hare reviews Tim’s memoir.

To be an IRA Volunteer in Belfast during the seventies was a dangerous life-style choice. Its members mingled in crowds to avoid detection and took whatever steps they could to survive and remain at liberty. The varied precautions they took have now become legend and folklore. Similarly, IRA supporters took risks, protected activists, marched on the streets, and suffered abuse. But imagine being black, from Beechmount, with the Brits all around, and being a supporter of the ‘RA!

This book is the tale of just such a person; his beginnings, his growing

up in Belfast, working for the Movement and the struggle and – surprise, surprise – his eventual capture and imprisonment.

Tim Brannigan was born to a strong and resourceful woman, Peggy Brannigan, from Carrickhill. A married woman we hear that she fell for the charms of a Ghanaian medical doctor. Already married, with three children, she thought she could get away with her indiscretion – but giving birth to a bouncing black baby put paid to that. That’s where this story begins. Luck, which appeared to have forsaken her, returned to Peggy’s side.

For years, she had been a helper at ‘St Joseph’s Baby Home’ and – on occasions – had brought babies home with her for the weekend. Tim’s stepfather, Tom, we learn was completely unsuspecting of Peggy’s dalliance and, after his birth, Tim was quickly bundled off to St Joseph’s.

Peggy simply told family and friends that her baby had died at birth.

Traumatized by her own deceitfulness, she hatched a cunning plan to bring Tim home – by adopting him. This plan worked quite well, as neighbours were aware of Peggy’s big heart for orphan babies. Thus Tim becomes a fully paid up member of the Brannigan family and gains three elder brothers at one swoop, so to say. Another brother is born, and the unsuspecting Tom is eventually shown the door by Peggy who takes on another man in her life – Chris.

Being the only black kid on the block in Belfast brought daily problems for Tim. School time appears to have been mostly ok, apart from the usual racist comments from the odd school bully. But the Brannigans form a wagon around the kid – and he retells his upbringing and school days with much humour.

Growing up in the seventies brought the young Tim into the real world and this reviewer’s eye is caught by the title of a chapter: ‘Young, Lifted and Black’ (a parody of a hit song of the time ‘Young, Gifted and Black’, originally written by Nina Simone). Through education and determination to make a life for himself, Tim gets to Liverpool university and gains a degree. Qualified, he looks for work in Britain but soon hankers for home and Peggy.

Earlier, as a young boy, he had sold An Phoblacht for Sinn Fein, but getting on in college was his real goal. When he comes home, he tells us, it’s not long before the IRA comes a-knocking at his door. The end result is a tragedy for himself, his mother and brothers. He allows two IRA men to hide weapons in his mother’s old wreck of a car and is spotted by a local tout. Within a day, the family home is raided and all are hauled off to Castlereagh holding centre.

Fearful for his mother, he owns up and takes full responsibility. That sends him to jail for seven years and he eventually ends up in the H-Blocks where he knuckles down and does his time. The story recalls his attempts to become a journalist in which endeavour he shows great resilience. He never lets his various employers know of his conviction, however, and lives under a continual, fearful shadow that they will find out and give him the sack.

He ends up in the Irish News and, when another journalist warns him of threats to expose him, he informs his employers.  They are understanding. Unfortunately, the journalist who warned him is not so lucky. It was Martin O’Hagan who was assassinated by loyalists for his courageous expose of their criminality.

The latter part of the book tells a poignant story of his battle of wits with the brave Peggy as she fights serious illness.  Tim decides to give up his career to stay at home, full-time to nurse his mother, along with his other siblings. It’s a harrowing and heartbreaking end for his mother who is the real centre of this fascinating book. It is a short book but with many twists and turns. Only a Peggy Brannigan could hatch it.