The High Cost of Dignity 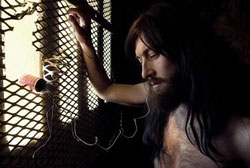 With calm, deliberate attention — an approach at once compassionate and dispassionate — “Hunger” explores physical extremity and political extremism. In recreating the atmosphere at the Maze prison in Northern Ireland, where Irish Republican Army militants waged a series of protests against the British authorities in 1981, Steve McQueen, a Turner Prize-winning visual artist and first-time filmmaker, finds an almost uncanny balance of violence and quiet. The brutality in the film is pervasive and often stomach turningly graphic, but what is perhaps most unnerving is the tact, patience and care with which Mr. McQueen depicts its causes and effects.

In early scenes of a prison guard (Stuart Graham) eating breakfast at his tidy home in Belfast, the camera lingers over tiny, sensual details, homing in on crumbs as they fall into a napkin in the man’s lap and examining the scabs and scrapes on his knuckles. This kind of unhurried watchfulness, as if filmmaking were entirely an act of observation rather than of reconstruction, conjures a sense of dread as well as intimacy. Nothing that happens at the Maze is hidden, euphemized or excused, though even the most harrowing scenes have a curious air of decorum, as if Mr. McQueen was trying to bring human dignity into a place where it has all but vanished.

And dignity, more than any political strategy or ideological principle, is the real subject of “Hunger,” which Mr. McQueen wrote with the Irish playwright Enda Walsh. In insisting that they be granted political status — that the bombings and killings they have planned and committed be respected as something more than simple crimes — the I.R.A. fighters first refuse to wear prison uniforms, huddling in blankets in cells smeared with rotting food and excrement and crawling with vermin.

Shaggy and naked, apparently intent on their own debasement, they are at the same time defiantly affirming their own humanity. The guards drag them from their cells, and the forced washing (accompanied by beatings) is a violation, a form of abuse. The ordinary concepts of decency and cruelty are somehow inverted, resulting in terror and confusion among the guards and an almost beatific calm in the ranks of the inmates.

The first part of “Hunger” (the film is divided into three sections, each quite different in length and mood) deals with the “blanket protest,” as the no-wash, no-clothes phase of resistance was known. We hear the voice of Margaret Thatcher on the radio, implacably asserting the nullity of the I.R.A.’s tactics and cause, and while Mr. McQueen does not ignore the Republican terrorism, it is clear enough that the preponderance of his curiosity, and his sympathy as well, lies with the prisoners. The way he shoots an inmate named Davey Gillen (Brian Milligan), in particular, framing his stringy hair and sparse, pointed beard in orange-tinted shadows, pointedly evokes the iconography of Renaissance painting.

This parallel is made both explicit and more complicated when “Hunger” turns its attention to Bobby Sands, who starved himself to death, along with nine other prisoners, in the hunger strike that followed the blanket action. Sands, played by Michael Fassbender, is charismatic and full of impish life, and his choice of martyrdom is at once an act of rational, strategic calculation and a measure of his single-minded, overpowering zeal.

He explains himself, fervently, wittily and at length, in a conversation with Dominic Moran (Liam Cunningham), a Roman Catholic priest who is an old friend and something of a moderate. Father Dom pleads with Bobby, calling him delusional and accusing him of insufficient reverence for life, and Bobby answers every objection with frightening clarity. Their debate takes place in an empty visiting room and lasts for more than 20 minutes, much of it a single shot of the two men facing each other across a table, smoking.

There is ample, if unassuming, virtuosity on display elsewhere in “Hunger” — including during the painful final scenes of Sands’s death — but this long stretch of talk is in some ways Mr. McQueen’s most audacious and impressive cinematic gambit. Having done so much with images, with eloquent passages that tell everything without dialogue, he stops to acknowledge the power of words.

And in the course of this haunting, often grueling film, Mr. McQueen makes you acutely conscious of the relationship between language and action, the gap between relatively abstract terms like “resistance,” “radicalism” and “hunger strike” and the concrete deeds that give them flesh. The scope of “Hunger” is too narrow, its methods too intensive, to offer anything like a full historical analysis of the Troubles in Northern Ireland, and it does not really set out to explain why Sands and his comrades did what they did. Instead Mr. McQueen shows how they did it, and in what circumstances, and the fruit of his inquiry is both horrifying and, strange to say, beautiful.