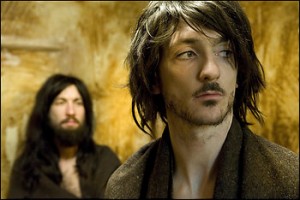 Toronto’s ‘Globe and Mail’ film critic Rick Groen reviews, 10th April: Hunger — the disturbing, provocative, brilliant feature debut from British director Steve McQueen — does for modern film what Caravaggio did to Renaissance painting. Centred on the death by self-imposed starvation of IRA activist Bobby Sands, it forces us to take a long, hard look at a martyr’s moment in history, but with the polite iconography completely stripped away, revealing the dirt beneath the fingernails, the filth on the walls, the anguish of the punished and the punishers, the blood shed and the blood spilled. Immersed in that moment, its awful sights and odours, all our senses are alive to the inevitability of a death that some will see as redemptive, others as wasteful, still others as perfectly just. And so the moment casts its lingering shadow, stretching from yesterday’s Northern Ireland to the Iraq, the Darfur, the Guantanamo of today.

More a tableau than a narrative (but with plenty to say), the film unfolds in three acts. The first and last are almost wordless, while the middle is a ferocious torrent of dialogue — overall, a verbal dance framed in silence. The hellish place is the Maze prison outside Belfast in 1981, where the IRA members, denied political-prisoner status by the Thatcher government, have embarked on their “Blanket and No-Wash” protest. Shooting quietly in extended takes, McQueen’s camera begins by tracking a guard at home preparing for his awful labours — soaking his cut knuckles in a basin of hot water, checking under his car for a planted bomb, arriving at H-Block for the day shift.

Simultaneously, a new prisoner gets booked in, and joins the protest by refusing a standard uniform, accepting only a rough blanket to cover his nakedness. In his cell, he meets a fellow republican whose hair is long, whose body is bruised, whose blanket has dwindled to a loincloth, and who has coated the walls with his own brown filth — not randomly smeared, however, but carefully painted in artistic swirls. Already, a theme starts to emerge: In politics no less than religion, the suffering body is the martyr’s last and fullest testament. The body is his art, etched in blood and excrement — and not just his art but also the raw material for conventional artists who wish to depict that suffering for their own purposes.

Yes, artists like McQueen, who’s acutely aware of his complicity in this process, conscious both of reproducing the religious imagery and of re-establishing the political context. But, unlike Mel Gibson in The Passion of the Christ, he doesn’t revel in suffering for cinematic effect, the pornography of pain, nor does he take political sides. Instead, his intent is to conflate the antagonists into a three-dimensional portrayal of how it looked and sounded and felt to be in that specific hell in those particular moments. How, for example, a guard would wield a truncheon to beat a No-Wash prisoner into taking a bath, a violent cleansing in the name of duty. But also how that guard would get assassinated by a single gunshot to the head, another violent cleansing in the same terrible name.

Then, the Hunger Strike. Overheard on a radio broadcast, Margaret Thatcher describes the strikers with characteristic bluntness: “They’ve turned their violence on themselves.” Obviously, but McQueen is far more eager to explore the why and the how. First comes “why” in the form of that wordy middle act, a colloquy between Sands (Michael Fassbender), the strike’s leader and its initial victim, and an empathetic local priest (Liam Cunningham), the voice of reason in the incongruous garb of the church. Superbly scripted by Irish playwright Enda Walsh, their conversation is a 22-minute take with a fixed lens, the pair sitting across a plain table in a Spartan visiting room. What they’re discussing, of course, is nothing less than the value of life and the meaning of death — two very smart men arriving at two very different conclusions.

The debate opens as playful banter. The priest smilingly mentions the prisoners’ habit of using their Bibles as a source of cigarette paper, and Sands doubles up on the joke: “We only smoke Lamentations.” Volleying over, the serious exchange heats up. Both agree on a common fact: The authorities won’t compromise; the starvation will prove entirely useless as a negotiating tool. So the priest urges Sands to consider his family, his son, his fellow inmates, and to reject the deluded futility of “starting out already determined to die, to commit suicide.” His listener retorts, “You’re calling it suicide, I call it murder,” and then, tiring of words, he insists on action: “I will act; I will not stand and do nothing.”

Yet, clearly, the only mode of action that remains to him is precisely to do nothing — to refuse food, medication, to refuse life itself in favour of a death sentence, a death statement. All the rest, the film’s last third, is a near-mute gaze at the “how” of that statement, at how the body deteriorates without nutrition — the open sores, the weakened limbs, the breath that shortens, the organs that shrivel, the skin that cannot abide even the touch of a thin white sheet. When that sheet becomes a shroud, when the “hunger artist” has finished his final canvas, a man dies and a martyr is born — his corpse a testament to his fervent belief, and a symbol to those who believe in him.

But not the only symbol. At the moment of death, there’s this too: Overhead, in a seismic flapping, a dark flock of birds takes wing, and we’re left to decipher their meaning. Are they the freedom that fighters so religiously profess to die for, or just carrion-eaters with a hunger to feast on the remains?