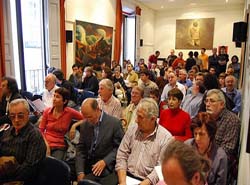 There will be a reading of Bobby Sands’ diary in Madrid on Friday May 6th at the Club de Amigos de la Unesco and will include music and a historical introduction. The event is part of the commemorations of the thirtieth anniversary of the 1981 hunger strike. The organisers say: “Thirty years after the death of Bobby Sands we want to pay homage to him and remember him through the writings he produced while imprisoned: prose, poems and songs in addition to passages of the diary he wrote over his first 17 days on hunger strike. The texts selected will focus on the human values contained in his literary work, as well as considering the circumstances and context in which they were written.

Another Prize for Bobby’s Diary