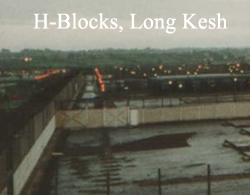 On Sunday 12th April last the Sunday Times printed an allegation from Sean Flynn (IRSP) that he had visited INLA hunger striker Kevin Lynch on Sunday 5th July in 1981 and that Kevin Lynch “knew nothing” about behind-the-scenes attempts to resolve the prison crisis. Flynn, according to Liam Clarke, also claimed that he “went into the prison with him [Morrison] on the second of his [Morrison’s] two visits that day.”

Danny Morrison challenged Clarke’s report and Flynn’s account. Clarke had been in regular contact with Morrison in the days before he wrote his report yet never put the allegation to Morrison.

Morrison wrote to Clarke: “I was not in the prison TWICE as you allege and I want a correction in next week’s paper. I hardly know Sean Flynn and was certainly never in the prison with him.”

Clarke replied: “Maybe I could have asked you for comment about Flynn, but I spoke to him late in the week and he seemed quite clear on what happened. As it was I gave your account alongside his.” Clarke in a later email said he was “doing his best to check and reconcile the accounts.”

Clarke telephoned Morrison on Monday, 13th April, to help clear up any confusion. Morrison during this call and in subsequent emails put it to Clarke that he was in the jail only once on July 5th as a result of an intervention from a senior British official, and that the next time he was in the H-Blocks was ten years later after being sentenced to eight years imprisonment. He had been driven to and from the jail by a member of the IRSP. Morrison put to Clarke a number of questions.

Clarke replied: “Yes I asked him all that. He is trying to get me the number of the person who brought him and has already given me the name. He says he was rung by the NIO to go to the prison after being told that there was the possibility of a breakthrough and seems to have assumed that was about the ICJP [Irish Commission for Justice and Peace]. He says he got in as a result of the NIO call that there was a possibility of a breakthrough. He says he did not know of any secret goings on beyond the ICJP though he says there was suspicion in IRSP circles that there might be something they weren’t being told about.”

Morrison again emailed Liam Clarke for Sean Flynn’s detailed replies to the questions he posed: “Well, if he has answered all those questions he will have said whether he asked the INLA hunger strikers what I was doing there and what I told them. So, what was his answer?”

Liam Clarke did not furnish Morrison with Flynn’s replies nor did he publish them in today’s edition of the Sunday Times. He merely tags on at the end of another story the following statement: “Last week I wrote that Danny Morrison visited the Maze prison twice on June 5, 1981 and that Sean Flynn, an IRSP leader, was with him on the second visit. Morrison says he only visited the prison once that day and did not see Flynn. Flynn is equally adamant that he met Morrison in the Maze that evening.”

“Sean Flynn’s allegations,” says Morrison, “explicitly claim that INLA hunger striker Kevin Lynch knew nothing about exchanges at resolving the prison crises, other than the ICJP initiative, despite my presence in the jail to apprise them of just that. It seems strange that Sean Flynn makes no mention of meeting Micky Devine, whom presumably he would have met given that he says the NIO phoned him to go to the prison hospital because of “the possibility of a breakthrough”. Could it be that this is an indication that he has got his days mixed up? I am asking Sean Flynn to release the answers to my questions which the Sunday Times has refused to publish. Furthermore, given that he claims he went into the jail with me could he tell us what we talked about? For example: ‘What are you doing in here, Danny? What do you think is happening? Do you know anything of the ‘breakthrough’ the NIO telephoned me about?’ and a host of other relevant life and death questions. I await a full response.”