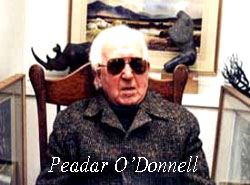 Dónal Donnelly, author of ‘Prisoner 1082 – Escape From Crumlin Road’ will be a guest speaker at the Peadar O Donnell Weekend in County Donegal. This cultural/literary series of events, held annually during the second last weekend of October, celebrates the life and times of Peadar O’Donnell – the socialist, republican, writer, and trade unionist who was born in Meenmore, Dungloe in 1893. Peadar was known as a great friend and companion of the migratory worker. He was a writer who saw his pen as a weapon in the revolutionary process. The Peadar O Donnell Weekend 2010 will take place on October 22nd – 24th.