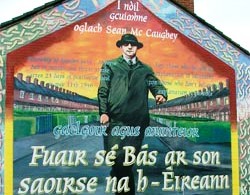 On May 11, 1946 Sean McCaughey died after thirty-one days on hunger strike, the last twelve on thirst strike, for his unconditional release. After his death, and partially as a result of the publicity detailing the horrific conditions under which he was imprisoned, Fianna Fail fell from power and the incoming coalition of Fine Gael and Clann na Poblachta (led by Sean MacBride, counsel for McCaughey), unconditionally released all IRA prisoners.

Sean McCaughey, a metal worker who spent the summers teaching Irish in the Glens of Antrim, was born on the 8th June 1915 in Aughnacloy, County Tyrone and came to Belfast with his family when he was five years old. He was imprisoned for a short while in the late 1930s and rose to become Adjutant-General of the IRA. Suspecting that the then leader of the IRA, Stephen Hayes, was in the pay of the Free State government, McCaughey and several others arrested and interrogated Hayes. Whilst Hayes was still in IRA custody, McCaughey was arrested. Hayes escaped and later testified against McCaughey at a Military Court which sentenced McCaughey to be shot by firing squad, though his sentence was later commuted to life imprisonment. In September 1941 he was moved to Portlaoise Prison and held in brutal and inhumane conditions. He was held in solitary confinement, naked but for a blanket. He started his strike on 19th April 1946. After sixteen days he stopped taking water and died on the 23rd day of his strike. The inquest into his death was held in Portlaoise Prison and the deputy coroner refused to allow Sean MacBride, counsel for the next of kin, to cross-examine the governor.

However, he was allowed to question the prison doctor, Dr Duane:

MacBride: Are you aware that during the four and a half years he was here he was never out in the fresh air or sunlight.

Duane: As far as I am aware he was not.

MacBride: Would I be right in saying that up to twelve or eighteen months ago he was kept in solitary confinement and not allowed to speak or associate with any other persons?

Duane: That is right.

MacBride: Would you treat a dog in that fashion?

The deputy coroner intervened: That is not a proper question.

MacBride: If you had a dog would you treat it in that fashion?

MacBride: Did you have to attend the prisoner for a nervous breakdown?

Duane: He suffered from a nervous condition for a time.

MacBride: By reason of solitary confinement?

Sean McCaughey is buried in the Republican Plot at Milltown Cemetery in Belfast.