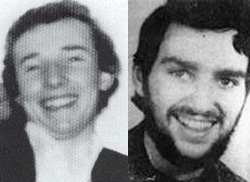 The campaign for the restoration of political status suffered two tragic blows on this day with the news of the deaths of Raymond McCreesh at 2.11am and Patsy O’Hara at 11.29 pm on Thursday May 21st, 1981. Tomás Ó Fiaich, then Catholic Primate of Ireland, criticised the British government’s attitude to the hunger strike. Both blanket men had begun their hunger strike on the same day, Sunday, 22nd March, 1981, and died after sixty one days. For full biographies see Raymond McCreesh & Patsy O’Hara