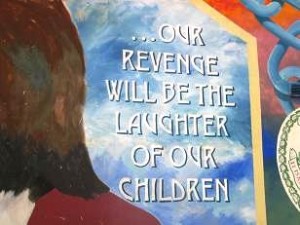 At 1.17am on the morning of Tuesday, 5th May, 1981, after sixty-six days on hunger strike, Bobby Sands died in his cell in the prison hospital of the H-Blocks surrounded by his mother, father, his sister Marcella and brother Sean. The Bobby Sands Trust remembers with pride this great Irish man.

“They have nothing in their whole imperial arsenal that can break the spirit of one Irishman who doesn’t want to be broken” – Bobby Sands.