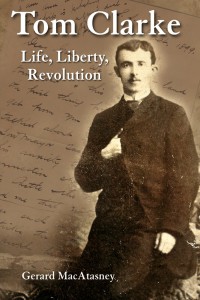 Tom Clarke was the first signatory of the Easter Proclamation, an honour his comrades bestowed on him in acknowledgement of the sacrifices he had endured for Irish freedom. Veteran Belfast republican Gerry O’Hare here reviews a recently published book on Clarke by Gerard MacAtasney. Gerard MacAtasney will be delivering a talk about Clarke and 1916 during this summer’s Féile an Phobail. All are welcome to the talk in St Mary’s University College, Falls Road, on Thursday, 1st August at 4.30pm.

Not too many books and tributes have been written about Thomas Clarke, the executed co-leader of the Irish revolution in 1916.  He appears in photos a bespectacled, older man – mostly silent.

Clarke, who endured sixteen years in English prisons, along with many other comrades, was the cruel victim of brutal treatment from his jailers and on reading the stories again one feels angry at the cowardly treatment by prison doctors who obviously never read their Hippocratic Oath.

As republican POWs went insane from their treatment the doctors pooh-poohed the madness as tricks from the prisoners. This heinous neglect for years shames the genuine English practitioners. Suffice to say the attempts by concerned families and friends to raise their cases fell on deaf ears as the authorities relied completely on the doctors’ tainted and bigoted diagnoses.

However, this latest book is mainly about the letters between Clarke and Katie Daly, his junior by twenty-one years.

In writing his book he expresses amazement why historians have almost completely ignored Clarke whom he rightly states was a pivotal figure in the 1916 Rising.

“However, the fact remains that, outside the figures of Patrick Pearse and James Connolly, little is known about the leaders of the 1916 Rising. Indeed, it wasn’t until 2004 that Sean MacDiarmada was the subject of a biography, while the life of Eamon Ceannt was the focus of a similar work in 2005.”

He calls his work a ‘hagiography than biography” explaining that it is interesting for what it excludes as much as for the information it contains.

Stating that this is the first serious book about Clarke in seventy-five years his wish was to bring to the readers the life of his subject “to be understood-in his own words”.

Clarke’s early letters tell us about the many and unsuccessful attempts to get employment in places such as the Dublin Corporation; and despite glowing testimonies from many friends he continuously falls short because of the voting patterns of people opposed to his past.

Disillusioned, he leaves Ireland for America to find work.

From here on the letters between him and Katie show their love for each other and their determination to end the opposition from her mother and Uncle John [Daly – whom Clarke had met in prison]. Mother and uncle believe, incredibly, “there is no rush”, which sends Clarke almost apoplectic considering his sixteen years in jail and his isolation from Katie in America.

Clarke also makes it clear that he has little time for the Catholic Church, its position in Ireland and his own lack of faith.

In one letter he refers to black people as “niggers”. Gerard MacAtasney says that this type of language was the ‘norm’ to describe the black community at that period and not a racist remark.

Eventually, Clarke gets fed up with his separation from Katie and decides to head home to open a newspaper and tobacco shop in Dublin city centre. And so, in 1908, he opens a tobacconist’s at 55 Amiens Street eventually transferring his business to… It was at this point I became slightly confused. There is no mention of a wedding.

In the chronology I discover that in fact the couple were married in New York in July 1901. Why the marriage is omitted I cannot explain.

Eventually, the conclusion of the book deals with the Rising, the preparation, the ‘failure’ of the Rising and the ultimate price Clarke paid with his life when he and the others were executed.

His last letter is short:

“Message to the people of Ireland

“I and my fellow signatories believe we have struck the first successful blow for Irish freedom. The next blow, which we have no doubt Ireland will strike, will win through. In this belief, we die happy.”
Thomas James Clarke

(Postscript – During her long widowhood of over 50 years Mary Clarke was politically active: she became the first Lady Mayoress of Dublin, a TD, and a Senator)

Gerard MacAntasney lives in Belfast and is the author of several books including Sean Mac Diarmada: The Mind of the Revolution & The Other Famine: The 1822 Crisis in County Leitrim 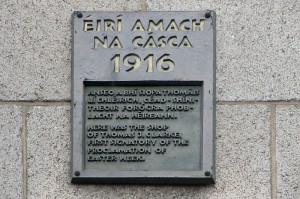