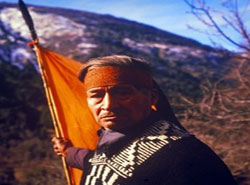 The trial has begun of 20 of the 34 Chilean Mapuche prisoners who staged a long hunger strike to oppose the application of the anti-terrorist law in their cases. In a system reminiscent of the British use of internment-by-remand and the use of supergrasses Mapuche prisoners can be held in prison for up to two years without a formal charge. When they are tried in a court, it’s the military court, which has a reputation for being brutal, not the civilian court. They can also be sent to prison based on the testimonies of anonymous sources.