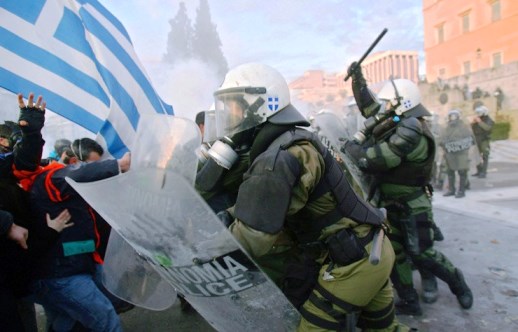 Former IRA prisoner Seanna Walsh was interviewed by Ethnos Sunday, one of the biggest newspapers in Greece, about the 1981 hunger strike, against the background of a Greek teenager who is now into his 25th day on hunger strike over his right to education. Seanna, who is a Legacy and Outreach worker with the ex-prisoners’ group Coiste na n-Iarchimí, spoke about the history of hunger striking in the Irish context and that no one ever enters into a hunger strike on a whim. He said that the way to avoid or resolve a hunger strike is for the authorities to respect the dignity and humanity of a prisoner.

Below we print a feature from from the online journal Roarmagazine written by Danai Limneou, an activist in the anti-authoritarian/anarchist movement in Greece:

NIKOS Romanos’ name is closely tied to the equally well known Alexandros Grigoropoulos, the 15-year-old boy who was shot and killed by police officer Epaminondas Korkoneas in Athens, on December 6, 2008. Only 15 years of age himself, Romanos witnessed his best friend die in front of his eyes. The murder sparked weeks of nationwide rioting.

Several years later, Romanos was caught together with four of his comrades while trying to flee from a bank robbery in Velvento. Following their arrest they were beaten up under police custody to such extent that the photographs released by the police had to be overtly photoshopped to hide their injuries.

Nikos Romanos, Andreas-Dimitris Bourzoukos, Giannis Mihailidis and Dimitris Politis openly stated that they are anarchists and revolutionaries. They were subsequently convicted on the charges of armed robbery, while the initial terrorism charges failed to stand in court. Many refer back to the speech delivered by the State Attorney Grigoris Peponis during the trial for the robbery in Velvento: “It is the first time I see a robbery in which they [the perpetrators] set the hostages free, while during the police chase, they did not use the heavy weapons they had, neither did they shoot the policemen, nor did they use the hostage as a human shield in order to escape.”

Last spring, while in prison, Nikos Romanos succeeded in passing the Greek entrance exams for university and was admitted to a faculty in Athens. Since September 2014, the beginning of the academic term, he has been eligible for educational furloughs (exit permits) to regularly attend classes.

The Ministry of Justice and the President of Greece, Karolos Papoulias, wanted to award Romanos and other inmates for their academic success. However, Romanos, being an anarchist, refused to attend the ceremony as this would go against his principles. The rejection of this invitation from the head of state and the refusal to accept the €500 prize money resulted in a clearly vindictive denial, by the prison council, of Romanos’s application for prison furlough to attend classes.

Many believe this is part of a more generalized vengeful tactic of the state to those resisting the new prison system. The type-C prisons in Greece have some similarities with the F-type prisons in Turkey. They are intended for “dangerous criminals” and the “ideological enemies of the state,” which includes revolutionary, political and rebellious prisoners — as well as those who voice their protest against injustices in jail.

On Monday, November 10, 2014, with anarchy forever in his heart (as he wrote), Nikos Romanos commenced his hunger strike. He thereby reaffirmed his anarchist principles and explained his motivation in a statement that laid claim to his lawful entitlement to educational leave from prison.

In his own words:

“In addition to being instruments of control and repression, laws are also used for maintenance of balances or what is otherwise called social contracts; they reflect socio-political correlations and partially form certain positions for the conduct of the social war.

“This is why I want to make my choice as clear as possible: I am not defending their legitimacy — on the contrary, I use them as political blackmail to gain breaths of freedom from the devastating condition of incarceration.”

On November 24, Romanos was transferred to the Athens General Hospital Gennimatas, where he remains — under strong police surveillance — to this day. His transfer was accompanied by an official document of the prison prosecutor, who audaciously stated that the hospital doctors bear responsibility for whatever happens to him, thus indirectly urging the hospital staff to enforce force-feeding.

Nikos Romanos’s physician, Pantelia (Lina) Vergopoulou, reported on November 28 that he is in critical condition, faced with life-threatening complications. His doctor warns that “it is no longer his health that is in danger, but his life,” given that “from one day to the next he may suffer a kidney or a heart failure.”

According to Romanos’ lawyer, Fragkiskos Ragkousis, Romanos has lost 17 kilos (over 35 pounds) and is now fighting for his life. With a heart rate of 170 bpm, Ragousis said that unless there is a change, cardiac arrest is considered “to be expected.” He also denounced the forced-feeding ordered by the district attorney director of the prison, stating that “this is equal to torture of the prisoner.”

During Romanos’ battle, other prisoners joined him as a sign of support and comradery. On November 17, anarchist prisoner Yannis Michailidis went on hunger strike as a sign of solidarity with the struggle of Nikos Romanos and as of November 28 he in turn also needed to be hospitalized in Piraeus general hospital Tzaneio, after he was diagnosed with bradycardia.

On November 30, Andreas-Dimitris Bourzoukos and Dimitris Politis, anarchist prisoners and comrades of Romanos, released a statement saying that:

“As a minimum token of solidarity with Nikos, we will also go on a hunger strike as of Monday December 1 — like comrade Yannis Michailidis, who is conducting a hunger strike since the 17th of November — until his claim is met. Together until the end, together until victory.”

With fears that the health of the two initial hunger strikers may be imminently and irreversibly damaged, many solidarity actions have taken place both within Greece and in other parts of the world. Nikos’ comrades declared to stand by his side in his struggle and support every move he desires and must take to accompany his battle, and will support every expression of aggressive solidarity that is needed. Romanos also declared that “solidarity means attack” and added an interesting post scriptum: “To all the armchair ‘fighters’, the professional humanists, the ‘sensitive’ intellectuals and spiritual personages: I say to you good riddance in advance.”

Rather than defend the legitimacy of state laws, Nikos Romanos is using one of the few means of struggle at his disposal in a state of captivity: placing his body as a barricade to get a breath of freedom. All comrades stand firm and continue their hunger strike.

The passion for freedom is stronger than all prisons!