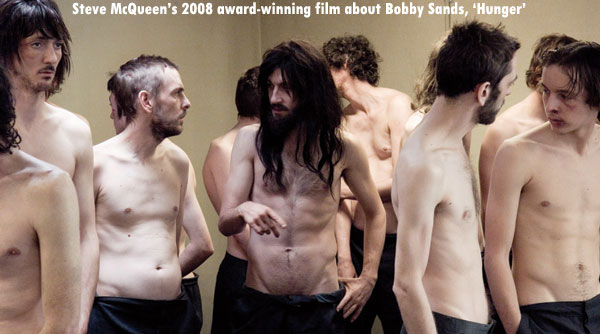 Controversial Scottish comedian Frankie Boyle named the film ‘Hunger’ (based on Bobby Sands) as number one choice of his Top Five films. Interviewed by Metro magazine he said: “This is the story of Irish republican prisoner Bobby Sands’ hunger strike. It’s like a visual poem almost and very moving. Sands (Michael Fassbender), was someone looking into the future, I suppose: ‘Our revenge will be the laughter of our children.’ I won’t spoil it but there’s a beautiful, poetic ending.”

Boyle, aged forty, is a follower of Noam Chomsky, a Celtic Club fan, and has been embroiled in controversy for his ‘black comedy’ and ‘insult comedy’ with complaints made about his comments, on tour and on BBC and Channel 4, about the British Queen, and physically and mentally disabled people. He is a staunch defender of the rights of Palestinians, describing Israel’s treatment of them as ‘apartheid’, and attacked the BBC for not broadcasting a humanitarian appeal during the 2008–2009 Gaza War.

When the Daily Mirror described him as a ‘racist comedian’, he sued the paper for libel, and in October 2012 a jury found in his favour, ordering the Mirror to pay him £54,650 in damages, all of which he donated to charity.

Ghost of Prison Past