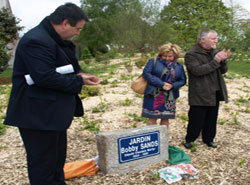 Irish republican sympathizers gathered last Sunday, 9th May, to inaugurate the recently redesigned Bobby Sands Garden in Plougastel, Finistere, France. This garden was first inaugurated in May 1991 on the tenth anniversary of the death of Bobby Sands by Mr Andre Legac, the then mayor of the town. The whole garden has now been re-landscaped and is an extremely attractive site (in the centre of town) and sight (beautiful garden with lots of plants and flowers) to commemorate the life and sacrifice of Bobby Sands and all the hunger strikers.

A plaque was unveiled by the current mayor of the town, Mr Dominique Cap and it reads: ‘GARDEN BOBBY SANDS, IRISH MP MARTYR, 1954-1981’