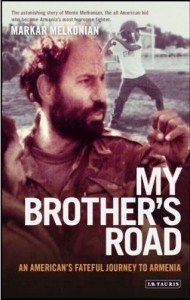 A new song, written by North American Joel Condon, which includes a tribute to Bobby Sands has been posted on YouTube. Another of those mentioned is the Armenian national hero, Monte Melkonian (nom de guerre, Commander Avo) who was killed in action in 1993 and who in Europe once travelled under the pseudonym Timothy Sean McCormick.

Joel Condon works as an architect in California, is a Fulbright scholar in Eurasia and a Professor at American University of Beirut. Currently he is a Professor of Architecture and Engineering Technology at University of Alaska, Anchorage. As an artist Joel has always been a supporter of people’s movements and been inspired by remarkable individuals who have attempted to change the world to make it a better place.

‘Liberty’ is his most recent song and the YouTube footage accompanying the song was produced by his wife Seta Melkonian (Kabranian) who had married Monte Melkonian two years before his death. Seta is an Armenian activist, a lecturer, a writer & translator (Armenian English), who co-authored a remarkable book, ‘My Brother’s Road’, with Monte’s brother, Markar Melkonian.