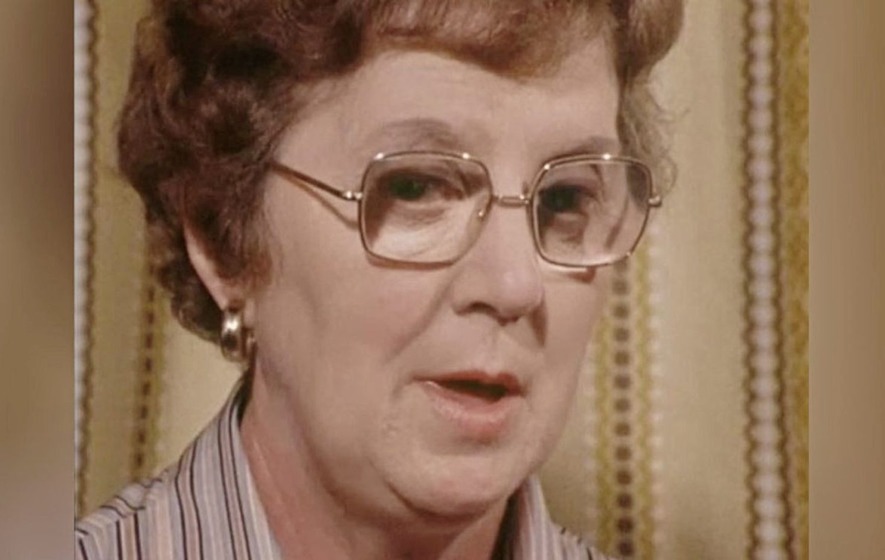 Last month the mother of IRA Volunteer Kieran Doherty died in Belfast. Margaret Doherty was predeceased by her husband Alfie, and both, along with their children, had campaigned tirelessly in 1981 on behalf of Kieran who died after 73 days on hunger strike. The Bobby Sands Trust offers deepest condolences to the Doherty family circle and Kieran’s siblings Michael, Terry, Roisin, Mairead and Brendan.

After Mass in St Agnes’ chapel, the funeral cortege moved to Milltown Cemetery where the oration was given by Caoimhghín Ó Caoláin TD, who had been Kieran’s election agent when Kieran was elected TD for Cavan/Monaghan. Film footage of the funeral can be viewed here and the oration read below:

Members and friends of the Doherty family,

Thirty-eight years ago, last Sunday, on the 4th August 1981, many of us here today, and thousands more, gathered with the Doherty family in Milltown Cemetery to pay our respects and demonstrate our support for the protesting republican prisoners in Long Kesh as we laid our comrade Vol. Kieran Doherty T.D. in his final resting place.  His heartbroken parents stood at the graveside, his mother Margaret proudly holding the tricolour, beret and gloves that had lain on his coffin during his final journey.  No mother, no parent, has more proudly held these symbols of their son’s or daughter’s commitment to and service in the struggle for Irish freedom, for Justice and for Peace. 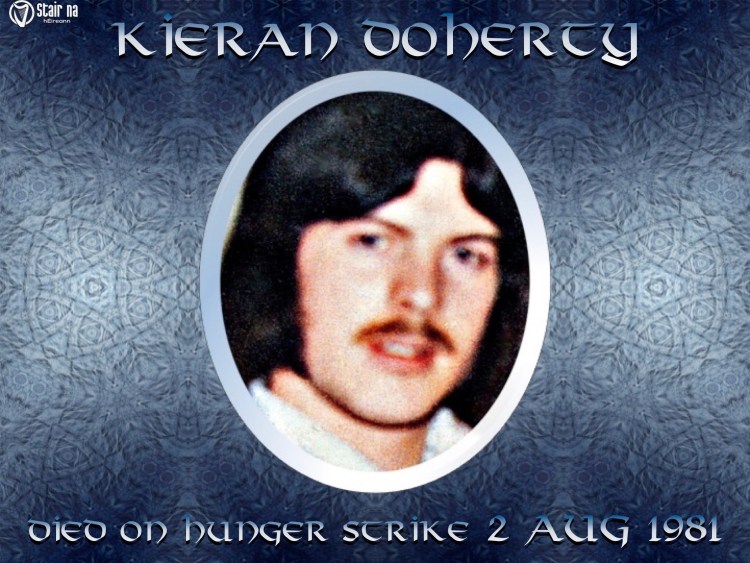 And so it was that thirty-eight years later, to the day, that courageous and dignified mother drew her last breath.  While Margaret Doherty’s remains have now been placed beside those of the love of her life, her husband Alfie, who passed in January 2008, it is our belief and it is our shared hope that she is now also reunited with her son Kieran whom she and Alfie so faithfully stood by through the most difficult of days.

The truth of those dark and challenging months in 1980 and 1981, when men and women of courage and conviction, incarcerated in Long Kesh Prison Camp and Armagh Gaol, stood defiantly against the might and brutality of the British murder machine in Ireland, should be told and retold time and time again.  Those of us who lived through those days should never forget and those born since should be given every chance to know the truth of those times.

There are many stand out truths – the treachery of the British Government, the cold-hearted intransigence of Margaret Thatcher, the brutality of the British armed presence in all its guises, the absence of justice from the judicial system, the state sponsored sectarian murder gangs, the attempted criminalisation of Irish Republican prisoners and the ill-treatment meted out to them, including strip-searching, the shoot-to-kill policy and the insidious broadcast censorship, to name but a few.  Some of these offensive realities also presented south of the border.

These abuses and the oppressive regime that spawned them were met head on by an ever more determined risen people. For many their energy and opposition was channelled through their local anti-H-Block and Armagh Gaol action groups.  Hundreds of thousands took to the streets across Ireland.  In April 1981 the people of Fermanagh and South Tyrone elected hunger strike leader Bobby Sands their Member of Parliament.  In June the people of Monaghan and Cavan elected hunger strike prisoner Kieran Doherty their Teachta Dála.  Another protesting prisoner, Paddy Agnew, was elected in Louth.

Coupled with the stand out truths are countless stand out memories of those times.

An abiding memory, predominant in my thoughts today, is of a tall, graceful, dignified woman, quiet spoken, who could be neither brow beaten or cajoled into abandoning her promise to her son.  She would stand by him and his comrades in their stand, no matter what.  She and her husband would never seek to break their sons resolve, though their own hearts were breaking.

Despite the inner anguish and the constant pressure from several sources, including from certain priests of the church, Margaret and Alfie stood resolutely behind their son.

Margaret Doherty not only demonstrated strength, particularly as Kieran’s hunger strike moved forward, but she undoubtedly gave great strength to her son and she demonstrated a stoicism to all the parents and families of the hunger strike and protesting prisoners.

But who was this woman of exceptional courage and dignity?

Margaret Forsythe was born on 3rd June 1927 to a Protestant family in Belfast’s Shankill.  She was one of three children, two girls and a boy.  She celebrated her 92nd birthday just two months ago and is survived by both her siblings.

Margaret was an attractive, tall and elegant girl who loved to dance.  Ballroom dancing was her great joy.  And it was that passion that brought her on a journey in life that even she could not have foreseen.

Alfie Doherty was a Falls Road Catholic, tall and handsome, who happened to also like to dance and that is how they met.  Ballroom dancing.  There should be more of it.  Reuniting Ireland and the part it has played.  Now there’s a thesis no one has undertaken.

Margaret and Alfie went on to become gold medal champions and have a collection of medals, gold, silver and bronze, from their years on the competition dance floor.  They competed successfully here at home and represented Ireland, the island of Ireland, in international competition.

Margaret had worked for a time in the Bass Ireland Brewery on the Glen Road.  Alfie had worked as a floor tiler.  In later years he took the role of Manager of the PD in Andersonstown.

They got married in Dublin.  Not everyone who could have been, or should have been, was there.  Margaret converted to Catholicism.  Irrespective of her attendance at either church or chapel, she was a devout Christian all her life.

She was not only a gifted dancer for l learned from the family the other evening that she also had a great signing voice and did on at least one occasion ‘bring the house down’ in what was once the Hippodrome in Belfast.

Margaret was also a gifted craftswoman.  She particularly liked to crochet, and hand produced a special doll that many children, one of my girls included, have cherished over the years.

It has always been a joy to spend time in Margaret’s company.   I personally cherish the very special relationship that I and my family have had with Margaret and Alfie and with all the Doherty family.  That relationship extends to many of my friends and contemporaries across Monaghan and Cavan, some are here with us and many many more will be remembering Margaret today in their thoughts and prayers.

A woman of strength and of conviction, Margaret Doherty was an Irish Republican committed to the achievement of a real republic where the labels that have been employed to divide us would be replaced by the common name of Irishmen and Irishwomen, a Republic to which we would all be proud to declare our allegiance. 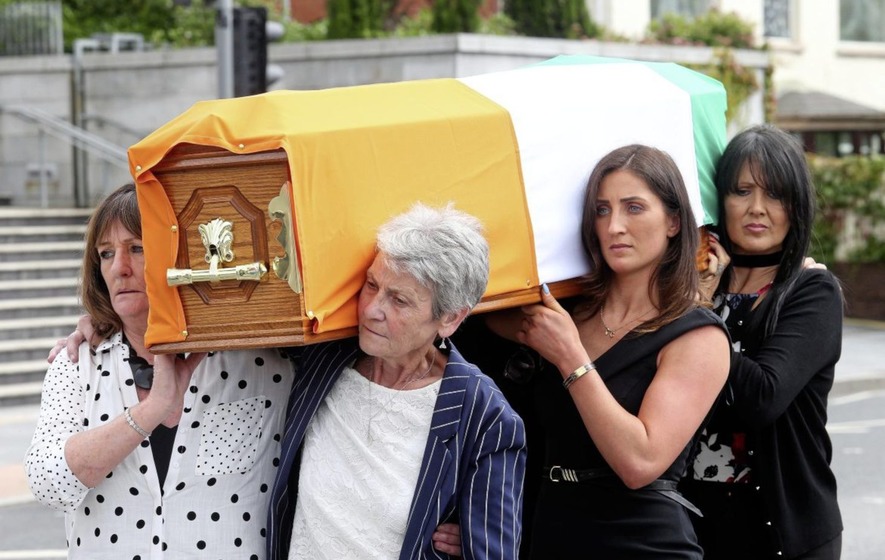 On all our behalf’s and on behalf of countless thousands throughout Ireland and amongst our diaspora, I extend heartfelt sympathy to Michael, Terence, Roisín, Mairéad and Brendan and to their spouses and partners Betty, Geraldine, Rab, Liam and Charlene and to Margaret’s grandchildren, Gráinne and Kieran, Aisling, Ciara and Bronagh, Karen, Emma, Roisín and Jacqueline, Ryan and Liadh and to Áine and to Catherine and to her great grandchildren and two great great grandchildren.

With Alfie and with Kieran and with all who have walked with her in this life may she rest in Peace.

“They Showed Us Leadership”