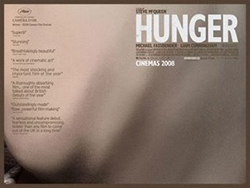 The veteran Canadian writer and director Peter Pearson has reviewed ‘Hunger’ on his blog and makes some comparisons between Che Guevara and Bobby Sands. Here is his review in full:

Coming out of last night’s sneak of Hunger, which 26 of us attended thanks to Equinoxe’s Brigitte Tanguay, the overwhelming response of our grim-faced crowd was ‘Tough’. Agreed. At least two members couldn’t take it and quit early in the first act. Hunger is one grueling film to watch, feces smeared over cell walls, pervasive cudgel-beatings, soulless debasements. I cannot recall a movie more grim. Nor more dazzling.

And so while composing my response to our crowd’s response, I dawdled over this morning’s NYT. Here’s a report from today’s paper on interrogation techniques, utilized by the CIA:

In dozens of pages of dispassionate legal prose, the methods approved by the Bush administration for extracting information from senior operatives of Al Qaeda are spelled out in careful detail — like keeping detainees awake for up to 11 straight days, placing them in a dark, cramped box or putting insects into the box to exploit their fears. The interrogation methods were authorized beginning in 2002, and some were used as late as 2005 in the C.I.A.’s secret overseas prisons. The techniques were among the Bush administration’s most closely guarded secrets, and the documents released Thursday afternoon were the most comprehensive public accounting to date of the program.

Which of course raises the question: do we, public-minded citizens need to know what happened in the Lamaze prison to those IRA prisoners in the 1980s? Similarly, can’t we just gloss over waterboarding, sleep-deprivation, debasement and degradation those Iraqis suffered in Abu Griab? Do we need to know it in such detail? Do we need to see the video? In Hunger, as in Iraq, the prisoners fight for their dignity.

My initial response to Hunger, which I dared not say aloud last night, was: It’s only a movie. Movies are all shot the same – lights, camera, make-up, action. Doesn’t matter whether it’s the Texas Chain Saw Massacre or Sound of Music. Same cumbersome technology, shot by shot, until the movie is done. Of course hardened veterans of my-pov.ca and MILR all know this. But it the entrancing legerdemain of moviemakers that gets us every time. Hunger director, Steve McQueen is a visual artist. This is his first movie and he beguiles us that those sets, costumes, actors are real bed sores, feces-splattered walls, fetid cells. And yet, McQueen’s scenes were for the most part, less grim than any average Hollywood guns-and-fireballs epic. We just believed the bloodied knuckles of Hunger’s prison guards more.

We believed those actors were being put through the real thing, because we saw their real naked bodies, with their real naked genitals, we heard the real steely, patronizing voice of Maggie Thatcher (with the same dispassionate patronizing indifference of Dick Cheney), and we thought, hands-slapped to our cheeks, My gawd? Steve McQueen persuaded us, engaged our eyes, our emotions, our heads, our hearts. This is what happened! Brits behaving like Nazis. They stirred deep thoughts within us. But these weren’t Nazis. They were our own kind with a capacity for behaving like Nazis. McQueen convinced us this movie was not a movie. It was the real thing.

I had a couple of other idle thoughts about Hunger. First, as in The Reader, we are seeing abundant unairbrushed nakedness in movies these days. No longer the cutesy peek-a-boo angles. In The Reader, moviestar Kate Winslett is onscreen for much of the first act without a stitch on, her nakedness worn as an essential costume. Same as in the Hunger, where IRA prisoner brutalization necessitated unrelieved male nakedness, surely disturbing to some moviegoers.

And here’s my last thought: in the last two months, we’ve seen Che and now Hunger, two historical recreations that focussed on the martyrdom deaths of two 20th Century iconic figures: Che Guevara and Bobby Sands. They may not be Roman Catholic Church martyrs, although both were born Roman Catholic. And in both movies, priests play roles in the story. In Hunger is a spectacular 22 minute locked-off wide shot conversation between Bobby Sands and his priest. The camera does not move. Today Che Guevara and Bobby Sands certainly are martyrs for tens of millions, sealing their their commitment to help others with their lives.

Neither however can expect canonization any time soon I suspect. The Catholic Church is otherwise distracted, canonizing Pius the XII, the pope that looked the other way as Jews were deported from Italy, investing yet another silk-swathed Cardinal in New York, and settling tens of thousands of lawsuits, brought by priestly molestations.