Father Daniel Berrigan, the radical priest whom, along with former US Attorney General Ramsey Clark, the British government banned from visiting Bobby Sands on his hunger strike, has died. 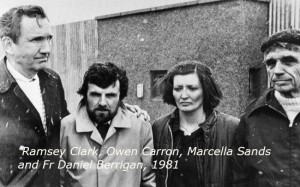 Daniel Berrigan visited Ireland on many occasions. His record on civil rights and in defying oppression is legendary. He was jailed for his opposition to the Vietnam War. He believed, fundamentally, that racism and poverty, militarism and capitalist greed were interconnected, were pieces of the same big problem, resulting in an unjust society.