In The Simplicity of His Defiance –

Kieran Nugent. A name that makes you proud to be from West Belfast. A name that was on our lips for years. So familiar. Yet, go back.

In truth, the Republican Movement in 1976 was very disorganised. One day a middle-aged man and woman, and their daughter, from Leeson Street, came into our offices at 170A Falls Road, the Republican Press Centre, and spoke to Tom Hartley. He took their details and called me down from the attic where I was editing the Republican News.

Their son had gone missing. They didn’t know where he was. He had been sentenced to three years in jail a few weeks before. It’s hard to believe but we hadn’t followed the case. We knew about the Diplock Courts. We knew that anyone convicted for an offence committed after March 1st would not get political status – but it hadn’t really dawned on people outside the jails.

But it had dawned on the remand prisoners. I think it was Sean Morris who had used the defiant headline in Republican News from a Crumlin Road comm, ‘They’ll Have To Nail It To My Back’. ‘It’ being the prison uniform. I don’t know if it was Kieran Nugent who said it but at the time of the 1981 hunger strike I interviewed him for a video and he said that if they had thrown him a towel after they stripped him of his clothes he would have started ‘the towel protest’.

As it was those cocky prison administrators tossed a blanket into this man’s bare cell on September 14th 1976, expecting him to “see sense” in a short period, or see their fists. And the rest is history. Bitter. Sore. Angry. Defiance. Our 1916. Giving rise to defiance and courage.

So here was Mr and Mrs Nugent and their daughter in our office trying to find out if we knew anything about their Kieran. A few weeks before, the British army had shot dead IRA Volunteer Danny Lennon at the wheel of a car which had then careered across Finaghy Road North and crashed into Mrs Anne Maguire and her kids. Joanne (8) and Andrew (six weeks old) died instantly and John (2) died the following day. Out of this incident the controversial Peace People were formed and the confusion and low morale within working-class nationalist areas meant that the blanket protest and, indeed, the first two years of the H-Block and Armagh protest movements on the streets were seriously retarded.

Yet, from the jails names emerged. We began to hear that a Ned Flynn was on the blanket, and, later, that Fra McCann, Gerard Murray, Jimmy Duffy and Joe Maguire were on the blanket in the Crum. Those were lean days. Uphill battles. Poor publicity.

There is a great description in Peter Taylor’s book, Beating The Terrorists, of the gung-ho atmosphere in the Monday morning briefings in Stormont Castle involving direct-ruler Roy Mason, RUC Chief Constable Kenneth Newman and the GOC of the British Army. Each of them became orgasmic as the statistics of the previous week’s arrests, interrogations and chargings were outlined. But in our Falls Road office we were receiving smuggled statements from the jails about the beatings in Castlereagh and Gough, about how this one had his ear perforated or a finger broken or an eye blackened or a rib cracked. Could we get the media to carry these statements! Could we get the SDLP to protest! Four years. No letters. No books. Batons. Beatings. Forced scrubbings. It would make you, even now, want to murder.

Kieran Nugent. The first blanket man. Tom Hartley gave a fine oration and talked about the simplicity of his defiance. Just before that, Fra McCann had described Kieran, who died suddenly and shockingly last week, as ‘larger-than-life’. And wasn’t it poignant that he should leave this earth on the nineteenth anniversary of the death of his comrade, Bobby Sands.

I have a few memories of Kieran. There is film of him on the day he got out of jail. Pale white face – not having seen the sun in three years. Later, he stood on a platform opposite Dunville Park and clenched hands with that other hero of prison protest, Billy McKee, whose 1972 hunger strike won political status recognition.

One night in 1983 Kieran, Fra McCann and myself were on the Dublin-to-Belfast train, returning from a Sinn Fein meeting. I was recognisable from my public appearances. A rugby club from Portadown was also on the train and some of them spotted me and started giving us abuse at the bar (well, where did you think we would be). One of them said, “Get Big Stevie. He’ll sort the bastards out!” So the word went down the train, “Get Big Stevie!” Big Stevie had to bend down four feet to get through the door and became quite cannibal, salivating when he spotted me and started growling now that we were passed Kilnasaggart.

Kieran set his bottle of beer on the table and said, for everyone to hear, “First one to touch you, Dan, loses an eye with this.” Big Stevie grunted and groaned, huffed and puffed, bent down four feet to retreat, and to this day can see his kids.

So, we buried Kieran Nugent last Saturday. Friends and family. Comrades. A guy who didn’t have a lot. Who life messed about. The first H-Block blanket man. 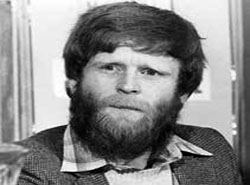