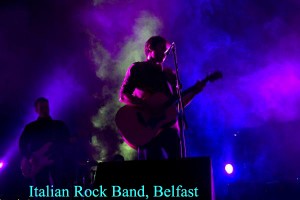 ‘Belfast’ is an alternative rock band based in Bergamo, Italy, and among the songs on their new CD is one called ‘Long Kesh’. Information about the band and this song (and a live YouTube performance) can be found here. Paolo Ghidini of the band, writing about the destruction of the H-Blocks, says in a message to the Bobby Sands Trust: “We are essentially pacifist, and we don’t have any political approach to the history, but we modestly tried to express our feeling about it with a song, named ‘Long Kesh’… How sad was seeing the maze destroyed during our last trip in Ulster… I think that in another country, it would become an historic museum.”