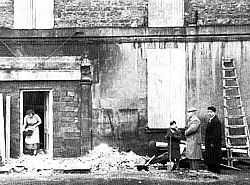 Lisnaskea barracks in Fermanagh (see photograph) was just one of many attacks carried out by the IRA during its 1956-62 border campaign. Veteran republican Gerry O’Hare reviews a new book about this campaign, ‘Operation Harvest’, by Belfast author Barry Flynn.

Like most young republicans born in the early forties, the border campaign of 1956-62 passed me by. We were more interested then in the rise of rock and roll, Elvis Presley, and dancing to the popular show bands of the era.

Occasionally, the ‘Irish News’ would splash a headline reporting ‘IRA activity’ somewhere on the border. It seemed a world away. We read it, tended not to take it in, and promptly moved on to the sports news (after our mothers had read the obituaries).

Jobs were plentiful then, and life seemed great.

But elsewhere in Ireland, others were plotting and planning, well away from the big city of Belfast.  It took the deaths of Sean South and Fergal O’Hanlon to make our generation sit up and pay attention. Their deaths were immortalised in song and reached into nearly every home with a nationalist bent – but their “notoriety” didn’t last long and we were back again checking out where the show-bands were playing in Belfast, Ballymena or Bangor.

Now, a new book by Barry Flynn, ‘Soldiers Of Folly’,  attempts to piece together the plans, characters and actions of the IRA, in what we now know as the Fifties’ Border Campaign (so-called because the IRA of that time took a decision to wage war against British forces only in the countryside and away from Belfast).

Flynn is a Belfast-based graduate of Queen’s University, the author of two books on Irish boxing and one on Tyrone football.  A sports correspondent for BBC Radio Ulster, his book’s title is more pejorative than its treatment of those involved in the Border Campaign. The book brings that campaign to a wider readership in a simple and informative way. It certainly passed my own barometer test. I couldn’t put it down once I opened the first pages.

Many reasons are given for keeping Belfast ‘dry’ but the most common fear was that, in the event of a sectarian bloodbath, the IRA would be incapable of defending nationalists in the city.  It is for Belfast veterans to discuss as to the wisdom of such tactics.

‘Operation Harvest’ was the codename of the campaign. Its strategy was based on the Flying Columns of earlier battles fought during the War of Independence and, surprisingly, given developments since, it was a campaign fought and planned by mostly Southerners.

Those earlier campaigns had been successful. Sadly, ‘Operation Harvest’ was to last over six years and, despite the heroism of the volunteers, and with hindsight, it was a failure.

The cause of that failure, I take from the book, was that lack of Northern involvement, along with a dearth of support from the nationalist population in the North and – ultimately – the combined efforts of the two governments to crush the campaign by trials, convictions and, of course, internment.

The author brings the main characters to the fore in chronological order, dealing with the roles they played, their successes and sadly their downfall and ultimate failure.

Names like Ruairigh O Bradaigh, Daithi O’Connell, Sean Cronin, Gerry Lawless, John Joe McGirl, J.B. O’Hagan and many, many others jump from its pages. As does that perennial problem facing Irish republicans. As Brendan Behan put it, at the start of every meeting of the IRA leadership, first on the agenda is always “the Split”.

As you contemplate the history of Irish republicanism, it is difficult not to be irritated to think of the constant bickering and jealousies that shamed those who died, or were imprisoned, both North and South. The book, unsurprisingly given subsequent history, shows how the role of Southern governments throughout was particularly traitorous. Stormont’s role was, of course, utterly predictable.

There is no official date for when the campaign began but, on Saturday June 12, 1954, the IRA successfully raided the armoury at Gough Barracks in Armagh and got away with 300 weapons including pistols, rifles, Sten and Bren guns. The raid was led by Sean Garland (later general secretary of the ‘Officials’ in several of their guises).  He also played a prominent part in several other Border Campaign operations.

Later that year, another raid took place, on the night of October 16, led by Eamonn Boyce but it ended in disaster with seven volunteers arrested.

The earliest hint that a campaign was about to get underway came in a 1955 speech made by Belfast republican, Jimmy Steele, at the Easter Commemoration in Belfast’s Milltown Cemetery during which he said, “The hour of decision is at hand for all those who believe in Republican ideals.

“In no way, must there be any deviation from the objective of organising the people of Ireland in a full-scale campaign against British forces. It now remains, to put in place before the young people of Ireland, the ideal of service and to point out to them that the issue is now clearer than ever – Ireland and Ireland’s fight for freedom against England and England’s forces of occupation.”

Characteristically, not much room for ambiguity there. Steele by name …

At a commemoration in Galway, the Dublin barrister Seamus Soroghan called on young men to join the IRA and be trained in the use of arms to achieve the complete freedom of the nation.

Joe Christle, also from Dublin, told the crowd that the Republican Movement would soon be making its presence felt along the border and, in words that could not be misinterpreted, he said that the IRA “will make the six counties so hot that England won’t be able to hold them”.

In the following day’s ‘Irish Times’, there were several reports of similar statements throughout the North and South. But first there were elections to be fought, won and lost in an attempt to rally the Irish public. We learn that in 1955, Sinn Fein garnered 152,310 votes and had Philip Clarke elected in Fermanagh and South Tyrone and Tom Mitchell in Mid-Ulster.  Later, of course, the seats were taken away by the British because both men were prisoners. But the impressive initial vote led the IRA to believe it had a massive endorsement for the forthcoming campaign.

Meanwhile, ‘the Split’ raised its ugly head in the presence of Liam Kelly who had formed Saor Uladh and who was waging his own campaign. Kelly was what some today describe as a dissident.  His group, comprising fourteen men, attacked the RUC station in Rosslea having left a farmhouse in County Monaghan and crossed the border. The attack was thwarted and resulted in the death of Connie Green from Derry. The IRA was not happy as it was planning the start of its own campaign and criticised Kelly and Soar Uladh.

In language that has echoes to the present day, Seamus Soroghan, speaking to 2,000 supporters in Ennis, County Clare, warned young men “not to join sentimental or microscopic organisations such as those who attacked the RUC Barracks at Rosslea”.  While saying he “took his hat off to these men”, he added they were only endangering the position of the true IRA in their actions.

Needless to say, while all this was going on the Catholic Church warned anybody who joined the IRA they would be excommunicated. No surprise there as the Church has always sided with governments to maintain the status quo.

Barry Flynn claims that on December 11th the word was sent to all Flying Columns that the assault on the occupied six counties would begin at midnight on December 12th. The offensive would be launched simultaneously in several places at the precise moment when the British authorities least expected, as Christmas approached.

Over 150 volunteers were involved in the first attacks which caught the RUC and B Specials totally off guard. All operations were co-ordinated from County Monaghan.  The targets were  wide and varied with air and radar installations, military barracks, government buildings, courthouses, roads, bridges and custom posts all coming under attack. This review cannot list all the attacks over the six year period but I chose the following to give the reader a taste.

In the early hours of December 14th, the IRA launched two separate attacks on RUC stations in the Lakeland County (Fermanagh). The police station at Lisnaskea was attacked by the Pearse Column, led by Sean Garland, fresh from the assault on Gough Barracks, and had its front porch damaged in a bomb attack, but the RUC officers held their nerve and returned fire on the raiders.

Daithi O’Connell opened up on the station with his Thompson gun but the unit’s two Sten guns failed to operate and they were badly exposed as a gun battle broke out on the main street. Immediately Garland ordered a retreat and the unit headed for the border, abandoned their lorry and eventually made it to County Monaghan by foot in the early hours.

We also read of the disastrous attack on New Years Day 1957 in which Sean South and Fergal O’Hanlon lost their lives at Brookeborough. Their deaths struck a cord in the Irish psyche which elevated both Volunteers to martyrdom. Their funerals were attended by thousands both in Monaghan and Garryowen.

Whilst sympathy was extended to the dead men’s families, North and South, the Bishop of Clogher, the Most Rev. Dr. Eugene O’Callaghan advised the faithful that it was a mortal sin to “take part in any of the occurrences that had taken place recently.”

The IRA suffered many casualties and deaths during the campaign with the greatest loss of life at Edentubber, when five Volunteers were killed in a premature explosion. It was the biggest loss suffered by the IRA since the Civil War.

History tells us that ‘Operation Harvest’ would finally drift towards eventual termination, called for by the leadership. On 26th February 1962 the IRA, through the Irish Republican Publicity Bureau, and signed by J. McGarrity, sent out the following message:

“The leadership of the resistance Movement has ordered the termination of the Campaign of Resistance to British Occupation launched on December, 1956.  Instructions issued to Volunteers of the Active Service Units and of local Units in the occupied area have now been carried out.

“All arms and materials have been dumped and all full-time active volunteers have been withdrawn. Foremost among the factors motivating this course of action has been the attitude of the general public whose minds have been deliberately distracted from the supreme issue facing the Irish people – the unity and freedom of Ireland.

“The Irish resistance movement renews its pledge of eternal hostility to the British Forces of Occupation in Ireland.  It calls on the Irish people for increased support and looks forward with confidence – in co-operation with the other  branches of the Republican Movement – to a period of consolidation, expansion and preparation for the final and victorious phase of the struggle for the full freedom of Ireland”.

It was an end that would lead to recriminations and another seemingly inevitable split of the kind that has dogged the Republic Movement since its inception.

I recommend this book.

Published by The Collins Press

Gerry O’Hare did time, both as an internee and a sentenced prisoner. He was held in Crumlin Road Jail in 197, and, later, in Mountjoy Jail and Portlaoise Jail. He became a journalist with the Irish Press Group,  rising to become its Deputy News Desk Editor.He is currently Managing Editor of Ireland’s largest travel newspaper, ‘Travel Extra. 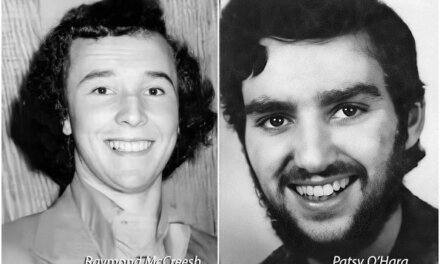