During Palestine Day at Féile an Phobail Palestinian representative Haneen Zoabi spoke on a platform with Sinn Fein MLA Pat Sheehan who was on his fifty-fifth day of hunger strike in 1981 when the hunger strike ended. During her visit to West Belfast Haneen also visited the Republican Plot in Milltown Cemetery and the graves of Bobby Sands, Joe McDonnell and Kieran Doherty TD.

Haneen Zoabi MK, is a Palestinian citizen of Israel who rose to international prominence following the Israeli attack on the 2010 Freedom Flotilla to Gaza. Haneen is a feminist, educationalist and parliamentarian. Elected to Israel’s parliament, the Knesset, as a BALAD party representative in 2009, she is the first Palestinian woman in Israel to represent an Arab-Palestinian political party in Israel and has become one of the state’s most outspoken and eloquent critics, and thus, one of the most controversial and hated politicians in the Knesset. Ms Zoabi was on a speaking tour of Ireland from Monday 6th to Friday 10th August, hosted by the Ireland-Palestine Solidarity Campaign.

Ms Zoabi, who was on board the Mavi Marmara ship when it was stormed by Israeli commandos, condemned the raid in Israel’s parliament as “a pirate military operation”. Her involvement led to her being portrayed as a hate figure by the Israeli right. Ms Zoabi was called “traitor” and “terrorist” by her fellow parliamentarians, suffered an attempted physical assault by one of her Knesset colleagues, received death threats, and demands from the Israeli Interior Minister, Eli Yishai, that her parliamentary immunity and Israeli citizenship be revoked. As a result the Knesset has since removed a number of Ms Zoabi’s parliamentary privileges, including the right to participate in discussions and to vote in parliamentary committees. In another incident she was shot in the back and neck with rubber bullets by Israeli police during a demonstration against right-wing Jewish extremists in northern Israel in 2010.

With a background in education and media, Ms Zoabi campaigns for equal rights for all Israel’s citizens and for an end to the Israeli occupation of the Palestinian Territories. She believes that the Israeli state ideology of Zionism is inherently racist and points to over 30 Israeli laws that legally discriminate against Palestinian citizens of Israel. Describing her quest for equality she has said, “The problem is not simply the terms of citizenship: we want to be equal to the Jews, but also, as the indigenous people, this homeland belongs to us. I want to be equal not because I immigrated or because I’m a citizen. Primarily I want to be equal because it is my homeland and nobody has the right to take it away.” At the Russell Tribunal on Palestine in South Africa she testified that Israel was an a state of “apartheid discrimination” and that “we the [Palestinian] citizens are a strategic threat because we reveal more than Palestinians in the Occupied Territories the contradiction behind the Jewish state and democracy”.

Ms Zoabi has been at the forefront in opposing the introduction of loyalty oaths for Israel’s non-Jewish minorities, Admission Committees and other anti-democratic legislation, condemning leading Israeli politicians, including the prime minister, as “all a bunch of fascists pure and simple.” Of the current legislative assault on Israel’s already-limited democracy she remarks that it is “a gradual continuation of long-standing policies that confiscated my land; that discriminate against me; and that refuse to recognize me as an equal citizen and as one of the owners of this homeland.”

Ms Zoabi additionally brings a much needed feminist perspective to the struggle for equality and civil rights, calling for Israeli feminists to join with Palestinian advocates: “We can’t call ourselves feminists if we occupy other women, demolish their homes, force them to live under a blockade, support settlement expansion, and then come home and talk about women’s rights.”

Despite on-going harassment and threats Haneen remains undaunted; referring back to those she is elected to represent, she has remarked, “I was not elected to keep silent or to sit at the table and clap”. 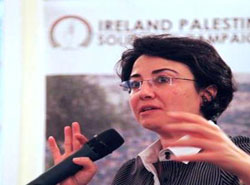