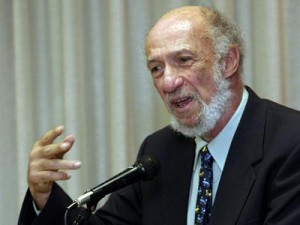 “A great relief,” is how Richard Falk, United Nations Special Rapporteur on Palestinian human rights, described the ending of Khader Adnan’s hunger strike and a deal which will see him released early by Israeli authorities who will not allegedly renew the order of administrative detention against him.” Here is the response and analysis of 82-year-old former Princeton international law scholar, Richard Falk:

It is a great relief to those millions around the world who were moved to prayer and action by Khader Adnan’s extraordinary hunger strike of 66 days that has ended due to Israel’s agreement to release him on April 17.

We, who were inspired by such a heroic refusal to accept humiliation and arbitrary arrest, can only hope that for the sake of his family, for the cause of Palestinian resistance, and for the struggle to achieve a just peace that Mr Adnan will fully recover to resume his personal and political life. We cannot take for granted that there will be a full recovery given Mr Adnan’s critical condition confirmed by examining doctors, just prior to his decision on February 21 to resume eating in a normal manner.

While it is appropriate to celebrate this ending of the strike as “a victory”, there are several disturbing features that deserve comment. To call an arrangement that saved someone’s life a “deal”, as the media consistently put it, is itself demeaning, and reveals at the very least a failure to appreciate the gravity and deep dedication of purpose that is bound up with such a nonviolent form of resistance.

Similarly, the carelessness of the initial reactions was notable, often referring to Mr Adnan’s “release” when in fact he will be still held in administrative detention for several more weeks, and could conceivably be confined much longer, should Israeli military authorities unilaterally decide that “substantial evidence” against him emerges in this period immediately ahead. It should be noted that on matters of principle, Israel gave not an inch: even in relation to Mr Adnan, he will remain in captivity and will be subject to the “legal” possibility that his period of imprisonment could be extended indefinitely; beyond this, Israeli authorities conceded no intention whatsoever to review the cases of the 309 other Palestinians who are presently being held under the administrative detention procedure.

These include one prisoner held for more than five years, and 17 others for periods of two to four years. Israel did not even agree to a review of their excessive use of administrative procedure, an approach that, at best, is supposed to be reserved for true and credible emergency situations.

An inconvenient truth – It should also be noted that Israeli commentary treated the arrangement with measured cynicism, if not disdain. Even those Israelis who supported the agreement justified it as a way of avoiding trouble down the road should Khader Adnan have died, while held by Israelis in view of the measure of support his hunger strike was receiving among Palestinians and people around the world.

Keeping Mr Adnan alive was also seen by Israelis as a means to avoid a wider scrutiny of the institution and practice of administrative detention as it has been used by the Israeli military “justice” system. The announcement of the arrangement was made an hour before an emergency session of the Israeli Supreme Court was scheduled to hear Mr Adnan’s petition for release. This highest judicial body in Israel has in the past supported the military position in such instances. Here there was worry that the extremities of this case could produce an adverse result and even a repudiation of the manner in which Israeli authorities used administrative detention.

The procedure is allegedly used by Israel for security purposes. Instead, administrative detention is seemingly used to harass and intimidate militant opponents of an oppressive occupation – an occupation that has continued for 45 years, and is aggravated by continuously appropriating Palestinian land and water for the benefit of settlement expansion, while disrupting and cleansing long-term Palestinian residency.

What was entirely missing from the Israeli public discourse was some expression of compassion, even if only for the family of Mr Adnan, which consists of two daughters of four years or younger and his articulate pregnant wife, Randa. There was not even the slightest show of respect for the dignity of Mr Adnan’s long hunger strike or sympathy for the acute suffering that accompanies such a determined foregoing of food for an extended period.

Instead, the Israeli commentary that was at all favourable to the arrangement stressed purely pragmatic factors. It was one more lost opportunity for Israelis of all shades of opinion to reach across the abyss of political conflict to affirm a common humanity. In contrast, the spokesperson for the Netanyahu government, Mark Regev, was only interested in deflecting criticism aimed at Israel. He parried criticism by cynically observing that other goverments use administrative dentention in the name of security, including the United States, and that the legality of Israel’s use of administrative detention should not be questioned as it depends on a 1946 law enacted when Britain was controlling Palestine, implying not inaccurately that Israel was the “colonial” successor to the British!

Half-baked – Of course, Israeli ultra-hardliners went further in the same direction, referring to Mr Adnan as “a terrorist” despite the vagueness of official allegations that never made such a claim – instead contending that Adnan constituted what an official in Tel Aviv described as “a threat to regional security”, whatever that might mean.

As might be expected, the notorious Israeli Foreign Minister, Avigdor Lieberman, was characteristically forthright, calling his “release” a “wrong decision” because it is “our duty to honour and respect every Supreme Court decision even when we don’t agree with it”. As we know, Mr Adnan was not released nor did the Israeli Supreme Court make a decision. This comedy of errors by a leading government official should raise questions about Lieberman’s competence, not to mention his questionable political judgment on policy.

Israelis call Mr Adnan “a terrorist” without charges or proof. He is most often described more neutrally by those knowledgeable about his role and activities as a spokesperson for Islamic Jihad. There is no indication in his past or present that he was involved in violence, or even advocated it. Although Islamic Jihad has been responsible in the past for suicide bombings, it has abandoned the practice in recent years, and seems to be in line with the repudiation of such forms of violent resistance made by Hamas more than 10 years ago.

Mr Adnan’s prior arrests stemmed from militant peaceful demonstrations that landed him in Israeli jails eight times, and induced him to undertake shorter hunger strikes on three previous occasions, one as recently as 2010. From what we can tell, Mr Adnan is a committed activist who has associated himself with Islamic Jihad, but works on a daily basis as a baker and maintains an admired strong family role and popular community presence in his small West Bank town of Arraba.

Legacy – It is important to pause long enough to take account of Khader Adnan’s achievement – symbolically, substantively, and with respect to future possibilities. We should note that Mr Adnan’s hunger strike of 66 days is the exact length of Bobby Sands’ hunger strike in 1981 – strengthening the bond between the two men, a bond that has been movingly confirmed by a number of Irish family members of the strikers. What is more, the date of Bobby Sands’ death, May 5, 1981, is generally viewed as the turning point in the Irish struggle, the time when the British government finally started treating the Irish Republican Army as a political actor with genuine grievances rather than as a terrorist organisation that must be run into the ground and exterminated. We can only hope that Febuary 21, 2012 will live in history as a turning point in the Palestinian struggle. Only the future will reveal whether this is a pious wish on my part or becomes over time a historical reality.

Substantively, it is crucial to support a campaign to free the other several hundred Palestinians currently being held in administrative detention and to exert enough pressure to end reliance on the practice altogether. Mr Adnan’s brave stand will have been mostly without effect if his compelling exposure of the cruelty and arbitrariness of Israeli reliance on administrative detention is allowed to slip from view now that his strike is over.

And finally, we will know the enduring significance of Mr Adnan’s self-sacrifice by what takes place in the future. Will this event, possibly along with other influences, inspire a greater commitment to the Palestinian struggle for peace, justice, and liberation in occupied Palestine and throughout the world?

Maybe “the regional threat” that was being referred to by the Israeli official justifying Mr Adnan’s detention was an indirect, and hopefully accurate reference to the growing impact of the positive sides of the Arab Spring – that is, as an occasion prompting a further awakening of self-empowerment among Palestinians both in relation to their struggle and in their renewed quest for unity among themselves. Let us hope that Khader Adnan’s bravery becomes contagious!

Richard Falk is Albert G. Milbank Professor Emeritus of International Law at Princeton University and Visiting Distinguished Professor in Global and International Studies at the University of California, Santa Barbara. He has authored and edited numerous publications spanning a period of five decades, most recently editing the volume International Law and the Third World: Reshaping Justice (Routledge, 2008). He is currently serving his third year of a six year term as a United Nations Special Rapporteur on Palestinian human rights. Follow him on Twitter: @rfalk13