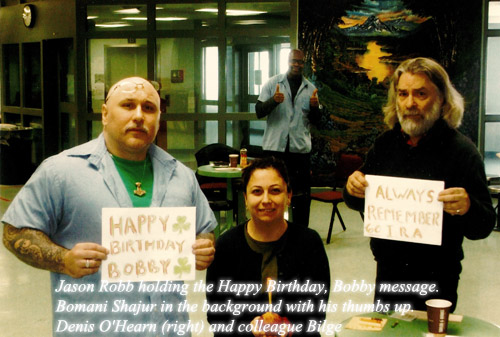 Denis O’Hearn, author of the biography on Bobby Sands, Nothing But An Unfinished Song, is Professor of Sociology at Binghamton University, USA, and has been involved in campaigning for the rights of death sentenced prisoners in US Supermax Prisons. He has sent us this report, about how prisoners in Ohio celebrated the 60th anniversary of the birth of IRA hunger striker Bobby Sands on 9th March, 1954. Here is his report:

You and others may be moved to hear about a birthday party that I attended yesterday. I was in Ohio State Penitentiary, on the 60th birthday of Bobby Sands, visiting my brothers Bomani Shakur and Jason Robb. Bomani and Jason, along with three others, are awaiting execution for their parts in a prison uprising in Lucasville, Ohio in 1993. There is no evidence that any of the five was involved in any killings that took place during the uprising but they led a movement to convince prisoners not to inform on other prisoners regarding any events that took place during the uprising. Bomani and Jason were offered deals by the state of Ohio to get very reduced sentences if they testified against other prisoners but they refused to do so and chose to save their souls at the possible cost of their lives.

As punishment, the state fabricated evidence of guilt and withheld evidence of their innocence and stage-managed a series of trials that resulted in death penalties. The five men remain steadfast friends and comrades. Two are white, two black, one a Sunni Muslim.

In January 2011, after reading accounts of the Irish hunger strikes of 1980-81 and of the life of Bobby Sands, three of the men went on hunger strike to demand contact with each other and open visits, where they could touch their friends and family and break bread together with them. This we have been doing since the victorious end of their hunger strike, although Bomani and Jason remain chained to separate picnic tables during the visits.

Yesterday, we bought a small cake from the vending machine in the visiting room. Jason, who is an accomplished artist, used the crayons and paper from the children’s play area of the visiting room to make birthday cards reading, “Happy Birthday Bobby”, and “Always Remember.” He constructed a birthday candle from paper, with a “flame” on the top, to decorate the cake. Together, we celebrated Bobby’s life and his ongoing contribution to freedom everywhere.

After the victorious hunger strike in Ohio, other prisoners around the United States read about Bobby and the Irish hunger strikers. Last year 30,000 men in California’s prisons went on hunger strike against solitary confinement. They organized the strike from a small area of isolated confinement called the short corridor that resembles nothing so much as the H-Blocks at their height of inhumanity, although these men do not even have windows in their cells. The men who organized the strike are African-American, Latino, and White. According to one recent report the men held all kinds of lively debates in their “pod” in Pelican Bay State Prison, but whenever the subject of Bobby Sands and the Irish hunger strikes came up the talk changed.

The state says that they are leaders of gangs that are at war with each other yet they have shown the deepest comradeship. The hunger strike lasted some 60 days and it may resume again if rights are not granted.

Last month, dozens of prisoners in Menard “administrative segregation” (solitary) unit in the state of Illinois went on a hunger and then thirst strike for their rights. Again, they cited the example of Bobby Sands who, among others, has been responsible not only for politicizing large segments of the US prison population but for showing them a way that they can fight for their rights through nonviolent resistance. Soon, I believe, there will be a nation-wide hunger strike in the prisons here to protest against the inhumane policy of long-term solitary isolation, which since 1983 has put tens of thousands of men into total solitary isolation, some of them unable to touch another human being for decades.

Today we hear that hundreds of undocumented migrants who are being detained in Tacoma in the state of Washington launched a hunger strike – on Bobby’s 60th birthday!

All of the Irish hunger strikers and their families, those with us and those who have passed from us, can take great pride in the fact that their struggle continues and that their example has given hope to tens of thousands of men who are still being held in “concrete tombs” in the richest nation in the world.