Another Prize for Bobby’s Diary

An Italian translation of ‘The Diary of Bobby Sands’, Il diario di Bobby Sands. Storia di un ragazzo irlandese, by Silvia Calamati, Laurence McKeown and Denis O’Hearn has won yet another prize, this time in Cassino, Italy, on October 19th last. Young students made up the majority of jurors of the award which was made by the Italian Cultural Association LETTERATURE DAL FRONTE (Cassino). The association was set up in 2006 to continue the activities carried out by the ‘Committee to remember the Battle of Monte Cassino,’ a famous battle during WWII.*

Present for the award ceremony were Silvia Calamati (third from left in front page photo) and former hunger striker and writer Laurence McKeown (second from left). The aim of the prize, beyond the purely literary, is to involve young people in the reading of texts by European writers who are regarded as ‘carriers of testimonies of crises of humanity, wars, disease, persecution, and violence. Each year the award focuses on a different country and the literature from that country. In 2013 the chosen country was Ireland.

The selection process to decide the winner of the award is unique in that students from high schools in four Italian cities (Rome, Trieste, Cassino and Pico), together with a scientific panel consisting of representatives of the world of information and culture (including two public libraries and a jury presided by the Trieste Association ‘Radici e Futuro’), have the opportunity to vote for the book of their choice.

Seamus Heaney’s Fuori campo was second place in the vote with Roddy Doyle’s The Dead Republic and Joseph O’Connor’s The Star of the Sea coming third and fourth respectively.

The ‘MOTIVAZIONE UFFICIALE’, written and agreed by all the Award jury members, formally explained why they decided to give the award to the book on Bobby Sands.

“After reading the book the students were asked to answer the question, ‘What idea comes out of this book?’ Their response was, ‘the belief in values’. And when asked, ‘To whom would you recommend it?’, the unanimous answer was, ‘anybody’. These two answers are symptomatic to understand to what extent the reading of this book had such an emotional impact on the students and why they awarded the editors with the “Premio Internazionale Letterature dal Fronte – Conoscere le Crisi dell’Umanità per Costruire la Pace”.

“Many of the students have confessed they did not know the history of Northern Ireland and we must credit Silvia Calamati, Laurence McKeown and Denis O’Hearn for having uncovered for us this sad chapter of our European history and having done so with a freshness in the language spoken by young people, and in a narrative style which is meaningful and clear at the same time. Their merit lies also in having reported the facts, using their pen as a scalpel to cut into the open wound of the contrast between British institutions and politics and the consequences of those policies on a people. If it is true that we build our freedom remembering how much it has cost, then Silvia, Laurence and Denis have given a meaningful contribution to the freedom of us all. We thank them gratefully for having transmitted with this book that ‘belief in values’ that our students so heartily have highlighted.”

Speaking at the ceremony Silvia Calamati said: “In spite of the strong attempt which is now taking place in the Six Counties to cancel the historical memory of the sacrifice of Bobby Sands and of his young comrades during the period of the hunger strikes, this award, the second award in Italy in three years, and the heartfelt interest for this book shown by hundreds of Italian students, indicates that Bobby Sands’ ideals and values that he believed in are still alive and strong all over the world. The decision taken by the Florence City Council to name a street after Bobby Sands is just one of the many examples that show how his ideals, values, and desire for a free Ireland cannot be quenched.”

Laurence McKeown, in his address to the assembled students and Scientific Committee, concluded by saying, “Bobby used to write under the pen-name ‘An Fhuiseog’, ‘The Lark’. I like to think of him as a lark, flying high over Montecassino today, feeling the heat of the sun on his body, the sun that he did not see when incarcerated in a concrete tomb in the H Blocks of Long Kesh; and looking down on this gathering of young students who thirty-two years after his death are inspired by his words. Bobby once wrote, ‘let our revenge be the laughter of our children’, and I can ensure you that today our children, a new generation, are laughing, are proud, are confident.”

On Friday 18th October, H – the feature film co-written by Laurence McKeown – was screened (with Italian subtitles) in a nearby college and followed by a Q & A event with the students, professors, and journalists. 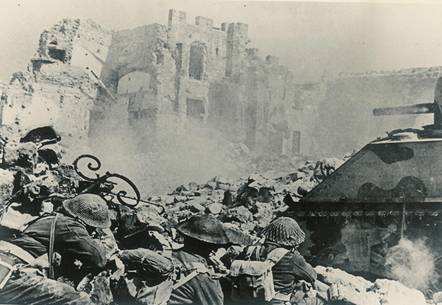 *The Battle of Monte Cassino, 17th  January – 18th  May 1944 (also known as the Battle for Rome and the Battle for Cassino) was a costly series of four assaults by the Allies against ‘the Winter Line’ in Italy held by the Germans and Italians during the Italian Campaign of World War II. At the beginning of 1944 the western half of the Winter Line was being anchored by Germans holding the Rapido, Liri, and Garigliano valleys and some of the surrounding peaks and ridges. Together, these features formed the Gustave Line.

Monte Cassino, an historic hilltop abbey founded in AD 529 by Benedict of Nursia, dominated the nearby town of Cassino and the entrances to the Liri and Rapido valleys but had been left unoccupied by the German defenders. The Germans had, however, manned some positions set into the steep slopes below the abbey’s walls. Fearing that the abbey formed part of the Germans’ defensive line, primarily as a lookout post, the Allies sanctioned its bombing on 15th February and American bombers proceeded to drop 1,400 tons of bombs onto their target.

The destruction and rubble left by the bombing raid now provided better protection from aerial and artillery attacks, so, two days later, German paratroopers took up positions in the abbey’s ruins. Between 17th January and 18th May, Monte Cassino and the Gustav defences were assaulted four times by Allied troops, the last involving twenty divisions attacking along a twenty-mile front. The German defenders were finally driven from their positions, but at a high cost.

The High Cost of Dignity