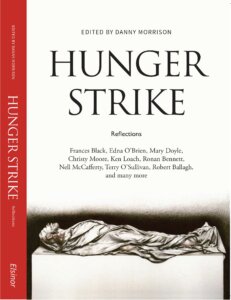 Hunger Strike—Reflections, edited by Danny Morrison*, was first published in 2006 but has now been republished with additional contributions from George Stagg (brother of hunger striker Frank Stagg) and Senator Frances Black, among others.

Well-known novelists and poets, former prisoners and activists reflect upon the deaths of the ten republican hunger strikers which proved a turning point in relations between Britain and Ireland. Most of the pieces here were specially commissioned, and while they differ greatly, what they have in common is a sense of the intensity of the experience of the hunger strike at the time, and the intensity of the impression made by it even now, forty years later.

*Danny Morrison is a former prisoner, a novelist, playwright and former editor of An Phoblacht/Republican News.