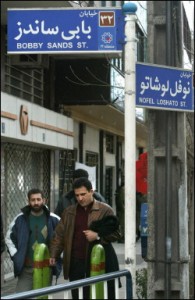 Bobby Sands once wrote: “Of course I can be murdered. But I remain what I am, a political POW, and no one, not even the British, can change that.”
In 1981 the Iranian government officially changed the name of Winston Churchill Street where the British Embassy is based to Bobby Sands Street. According to one press agency at the time, “the British nationals employed at the embassy don’t want to be located in a street named after a man whose organisation brought terror to the UK.”
The response of the British was to seal the entrance to their embassy on Bobby Sands Street and knock through the wall into Ferdowsi Avenue, which is now their new address.
In January 2004 it was discovered that during the third of five trips to Iran by Britain’s Foreign Secretary Jack Straw over the course of the previous two years, Iran’s Foreign Minister Kamal Kharazi had been lobbied by Straw to change the name of Bobby Sands Street.
This was rich given that in Ireland the British administration renamed many streets, towns and cities after her overseas conquests, her colonial battles, her royal personages and her soldiers, and did the same in every native land she conquered through imperial terrorism.
The nationalist community in the North of Ireland was delighted and proud when the people of Iran honoured an Irish revolutionary and reminded the world of British oppression and its black history, of Britain a country which brought suffering to the four corners of the earth in contrast to the courage and sacrifice exemplified by the name Sands.
It was that reminder which continues to stick in the craw of the British and which is why they want two words, Bobby Sands, erased from view, as if it were that easy to erase the spirit of freedom he continues to inspire.
In response to Straw’s lobbying the Iranian government the Bobby Sands Trust launched a petition to Iran which received thousands of signatures. The petition was presented to the Iranian Embassy in London in 2005.
The street remains Bobby Sands Street.